The US dollar gathered momentum in June as traders made their choices clear with substantial additions to their long dollar positions. The dollar turned in its best quarterly performance since Trump’s election in Q4 2016.1

Remarkably, the dollar gained against every major and emerging market currency, with several currencies hitting new lows for the year. Global investors continue to be attracted to the U.S. dollar for its relatively high interest rates, hawkish central bank and strong economy.

The U.S./China trade war escalates. The White House moved forward with plans to limit Chinese investment in the United States. The response from President Xi was that Asian nations would strike back at U.S. trade measures.2
A global trade war would hurt China and the world more than it would hurt the U.S. The dollar typically strengthens when global trade slows.

China drives its currency lower. China engineered a drop in the value of the yuan to a seven-month low.3
Expect the yuan to remain weak as China’s central bank may have shifted to an easing bias. This could be serving two purposes: supporting China’s exporters and effecting a clear retaliatory response to Trump’s rising U.S. tariffs.

Will German Chancellor Merkel’s CDU/CSU alliance survive? The migration issue is threatening to bring down the Merkel government. Disagreement between Merkel’s Christian Democratic Union and the Christian Social Union are heating up. These two parties have been politically allied since the end of World War II, and Merkel relies on the CSU for her parliamentary majority.4
Merkel has been called the real leader of the free world. Her departure would not be good.

The flattening U.S. yield curve worries investors. An inverted yield curve historically portends an economic recession. Traders are closely monitoring the yield spread between the 2-year and 10-year U.S. Treasuries, which currently stands at +32 bps, down from +88 bps a year ago.
The Dow and the S&P 500 are 10 trading days away from their longest corrections since 1984. 5

The Mexican peso is up for the second week in a row. On June 30, left-wing candidate Andres Manuel Lopez Obrador (a.k.a. AMLO) was elected as Mexico's new president. Before the election, Obrador's economic advisor said the peso was undervalued and should be strengthened, so investors priced his victory into a stronger peso.6 Now, investors anxiously wait to see how Obrador will approach President Trump’s trade issues along with ‘The Wall.’
The contretemps may become increasingly bitter and adversarial, which may score AMLO points domestically in the short-term, but ultimately may scare off investors and not benefit the peso.

Tariffs coming on Chinese imports. On July 6, more than $30 billion of Chinese goods will be subjected to tariffs.7
This is only the beginning.

Italy’s new government presents its first budget in September8 and political risks will probably re-emerge. An expected overly-expansionary budget would threaten relations with the European Commission, which may cause a market sell off in Italian stocks and bonds potentially leading to new elections in Italy.

The European Central Bank will taper its quantitative easing program in Q4 by reducing its purchases of mostly euro-zone sovereign bonds from €30 billion per month to €15 billion per month.9

Summer doldrums have already begun to reduce FX trading activity.
A huge drop in trading volatility and volumes has been observed during the FIFA World Cup matches.10

The euro, pound and Canadian dollar all dropped to multi-month lows in June.11
Now that major technical price objectives for the decline in each currency have been met, consolidation or even a short-term rally (a decline in the dollar) may be in order.

EU leaders agreed to a package of measures stemming the flow of migrants, which eased concern over a standoff between Italy and Germany.12 The euro gapped higher and Italian bond prices rose on the news.13

The South African rand collapsed. Treated as a proxy for EM risk, the rand is widely traded and has relatively high liquidity. So, the ongoing sell-off in emerging market assets and currencies hit the rand harder than other EM currencies, resulting in its worst quarterly decline in seven years.14

The Federal Reserve hiked rates by 25 bps.The hike moved the Fed’s rate range to 1.75 - 2.00 percent. Fed Chairman Powell’s hawkish comments surprised the market, yet traders still underestimate the odds of future rate hikes.15
The Fed remains the only major central bank with a tightening policy: neither the European Central Bank (ECB) nor the Bank of Japan (BOJ) have been able to raise rates even once.

Bank of England showed signs of hawkishness. In a surprise decision, the BOE’s Chief Economist joined two other Monetary Policy Committee members in voting for an immediate 25 bps hike in the Bank Rate.16
Although outvoted this time, the writing is on the wall for a rate hike in the near future.

French President Macron’s “grand plan” for Eurozone reform lies in ruins. Macron’s vision of fiscal union did not receive needed backing at the EU Summit to move forward. Decisions on the formal Franco-German Declaration were effectively postponed until December.17

Oil prices reached multi-year highs. The energy sector was the top industry sector in Q2, marking its biggest quarterly gain since 2011. Analysts are stating that the energy sector generally outperforms ahead of an equity-market peak and the Conference Board Leading Economic Index.18
This may be another sign that U.S. equities will soon head south.

Rely on SVB for FX capabilities that can help your company minimize foreign currency risk and maximize returns. Our advisors and traders utilize the latest currency hedging tools to help you buy, sell and operate effectively in an increasingly volatile global marketplace, and gain a competitive advantage while managing global currency risk. 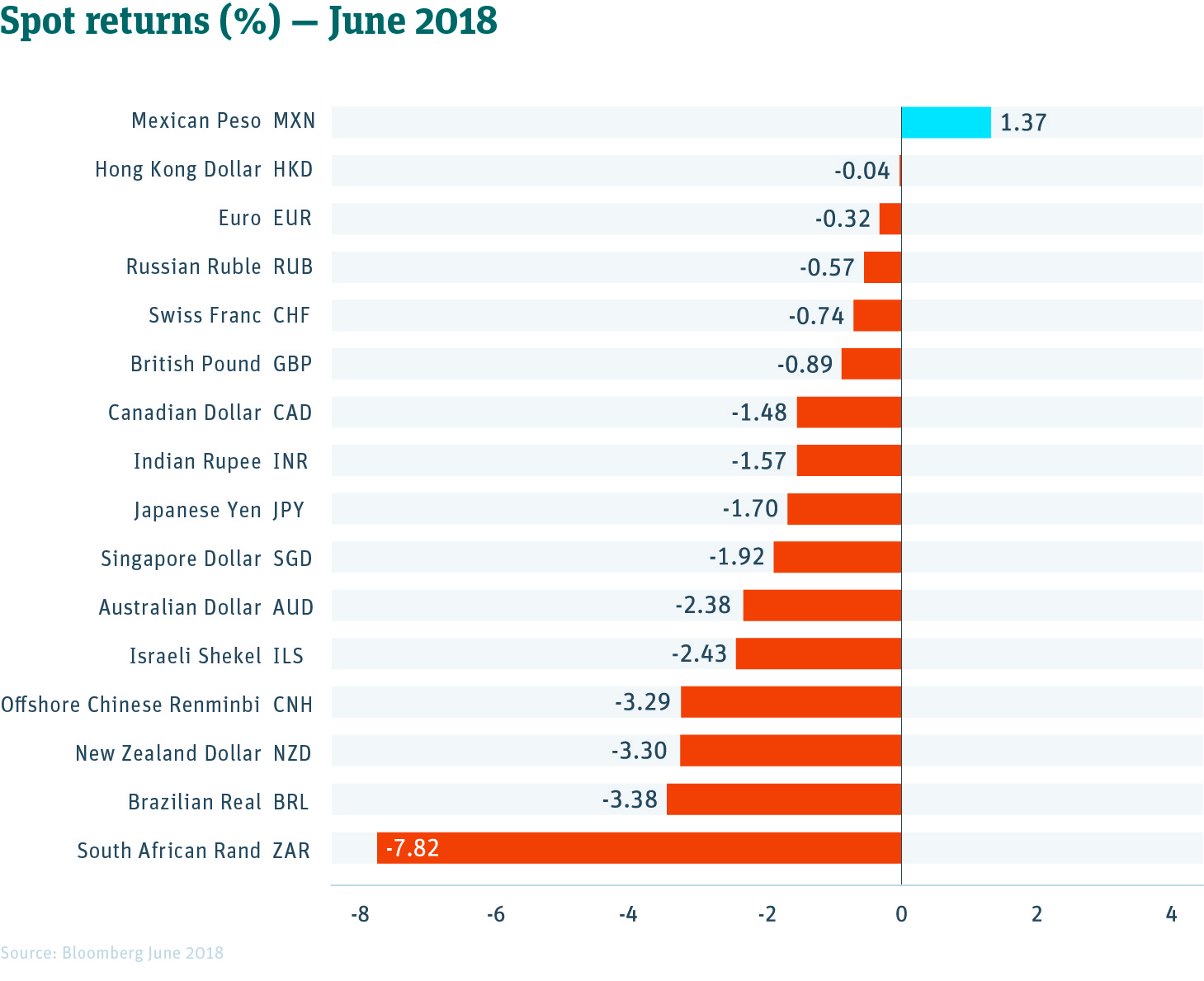