Amid all the chaos, from Brexit to China to Europe to Turkey to Trump, the US dollar has stood tall and strong. It has not only served as the ultimate safe haven, but despite a huge fall in yields, the US still has the highest, most attractive interest rates in the G10. What’s more, the Fed is well positioned to manage a global economic slowdown, and the US should suffer the least in a global trade decline.

However, a big question currently making the rounds within the investment community: Will the dollar remain the currency of choice if there is a significant decline in world economic growth and trade, as forecasted recently by several prominent supranational organizations?

The USD is fueled by strong fundamentals, although the technicals are unclear. The US dollar has benefited from strong economic fundamentals compared to other developed markets. Yet over the last nine months, the dollar versus other major currencies has held within narrow trading ranges, refusing to break out one way or the other. Large speculators are still positioned long dollars, but they have been gradually unwinding since mid-January.1

Brexit Blues. To paraphrase Jack Kerouac, Beat Generation poet, “Nobody knows what is really going on, and nobody knows what is going to happen.”2 The UK certainly has the Brexit Blues, and, to make matters worse, the European Union proclaimed that it’s is losing patience with the UK government.3 The EU has given the UK another week to deliver a deal, as it prepares for an EU summit in Brussels on April 10. Amazingly, the UK pound put in the best performance of all G10 currencies this year.4 Traders seem to have unwarranted confidence that British politicians will ultimately reject a no-deal Brexit. Should it happen, however, we could see the pound sterling decline in value by as much as 10%.


Italy dances with China. Italy signed a memorandum of understanding (MoU), the first G7 country to do so, to support Beijing’s “Belt and Road” investment program targeting 152 countries around the world. Italy’s support for China makes it a renegade within the EU, which increasingly views China as a rival and competitor rather than a “strategic partner.”5 Still, no European country has been able to resist the allure of China’s investment dollars, or to avoid putting a premium on exports to China.

Downbeat forecasts by the big supranationals. The IMF, the World Bank and the OECD have all lowered their forecasts for world economic growth for 2019 and 2020. The World Trade Organization (WTO) said that world trade faces strong headwinds amid rising trade tensions and increased economic uncertainty. How will international investors and traders, currently positioned overly long the US dollar and US assets, react if and when these big slowdowns become reality? We’ll be watching.


A Fed rate cut is priced in for December. Fed fund futures traders have a decent record when it comes to predicting the Fed’s actual path versus its path of “official” guidance. So, while Fed Chair Powell has said the Fed’s rate is “in a good place”, traders are already betting on a rate cut of 25 bps in December.6

European Parliamentary elections may surprise. According to a survey taken by a Brussels-based marketing firm, European voters are more concerned about immigration, the refugee crisis, jobs and climate change than they are about Brexit, the US-China trade war or President Trump’s tariffs.7 Populist parties may do better than the pundits anticipate in the upcoming elections, triggering some investors to flee EU assets.

US-China trade war. According to US Secretary of Agriculture Sonny Perdue, Chinese “attitudes” have hardened against a trade deal with the US. Treasury secretary Steven Mnuchin and US Trade Representative Robert Lighthizer met last week with Chinese trade officials, and will meet again this week to try to nudge China into an agreement on key technology issues.8 Keep your eye on the USD/CNY, as it may provide a signal as to how cooperative China will be in response to US trade demands.

Emerging market elections. Market-friendly candidates are expected to be elected this year in Indonesia, India, South Africa, Ukraine and Argentina.9 However, global investors will need to see the winners as pro-growth reformers. Many EM countries and their currencies are still at the mercy of our Federal Reserve, and its willingness to provide cheap dollars.

US yield curve inverted. UST 10Y yields (2.48%) fell below 3M Libor (2.60%) for the first time since 2007.11 Pundits claim that an inverted yield curve signals an upcoming economic recession. My view : there are simply more buyers than sellers of US Treasurys, in search of either a safe haven asset, an attractive yield or an alternative to overvalued equities.

President Trump nominated a conservative to Federal Reserve board. Stephen Moore, a fellow at the Heritage Foundation, a right-leaning think tank, was criticized by main stream economists and the #MeToo movement while awaiting Senate approval.12 Moore has expressed loyalty to Trump, which has reignited concerns about the Fed’s independence. 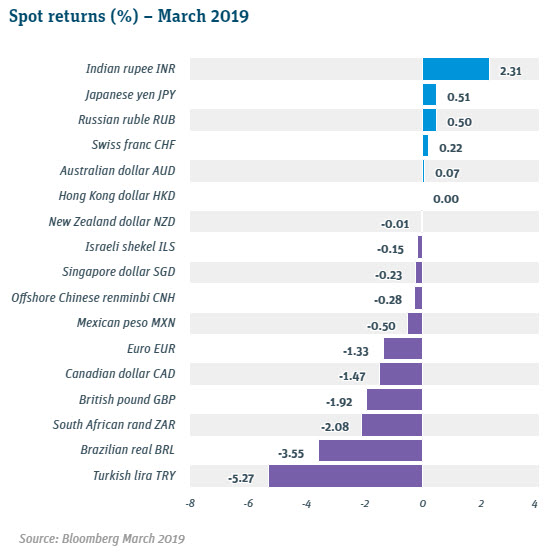 If you’d like to discuss your specific situation or to explore the merits of active FX management, contact your SVB FX Advisor directly, or email us at mailto:fxadvisors@svb.com

Subscribe to our Daily FX Updates to have currency news delivered to your inbox each weekday morning ET.