The battle for supremacy in currency markets wages on. Neither dollar bull nor bear ended March with a clear advantage —  despite repeated shelling in the FX combat zone that included geopolitical blasts, equity and bond market scuffles and trade hostilities. At month-end, the (trade-weighted) dollar had moved lower by under 1 percent.1

President Trump’s shift in focus from politics to policy continues to keep the world guessing and on the defensive. Investors and traders found themselves in several crowded positions — short yen, short U.S. Treasuries, long the Tech sector — and were forced into a full retreat.

The USD’s lower close at quarter-end extended a decline that has lasted five straight quarters — making it the second-longest string of quarterly losses in the dollar we’ve seen over the last thirty years. (The longest was six quarters of losses between 2006 and 2008 powered at the time by the Fed slashing interest rates.)2

Our forecast: in an extremely tough battle, the dollar bulls will be vanquished, and the dollar will continue to weaken this year — leading to a new record for consecutive quarterly losses.

The synchronized economic growth story is suspect. Recent U.S. data has been surprisingly strong relative to the rest of the world. Most EU countries are slowing with disappointing monthly economic figures. Even powerhouse Germany is struggling — with Retail Sales -0.7 percent, Factory Orders -3.9 percent, and Industrial Production -0.1 percent.3

Are the trade tariffs a scare tactic? Trump’s trade negotiating style may be to throw a grenade in first, scare the enemy, then set up a new trade agreement — which ends up being much more benign than most initially forecast.
Trump’s tariffs on Chinese goods may also be part of a strategic objective to rein in China’s global superpower ambitions.

FX volatility cools off. The major currencies spent most of the month trading in fairly narrow ranges, which in turn led FX volatilities to lows not seen since early January. Despite extreme volatility in the equity markets, FX options are priced for a continuation of low volatility in the currency markets.

Italy to form a new government. The Italian election on March 4 resulted in a hung parliament. Italian President Sergio Mattarella will now begin talks with parties on forming a new government. Although he has the power to name a prime minister, it is still unclear whether rivals can find common ground to form a coalition government — or whether another vote will be needed.

Campaigning commences for Mexico’s presidential election. Corruption, drug-related violence/trafficking, energy reform, infrastructure — including a new airport for Mexico City — and, of course, President Trump will be hot topics of debate.
Trump tweeted the threat: “Mexico must help U.S. with a border wall or risk losing NAFTA.” A populist candidate may be elected to challenge Trump. 4

The Bank of England to tighten. Despite all the grim forecasts, the UK has had a remarkably good year. Employment is strong, the GDP is better than expected, London remains the top financial center in Europe and even the UK’s national Personal Well-being Index stands at a peak. With inflation expected to remain above its 2 percent target, traders put the odds at 70 percent the BOE will hike rates by 25 bps to 0.75 percent on May 10 — with a 40 percent chance of another hike before year-end.5
This should support a higher UK pound in 2018.

Dollar technical support buckles. Many market technicians argue that the long-term uptrend in the dollar — which began in 2011 and reversed in late 2016 (following Trump’s election) — is currently trading within a long-term downtrend, which may last several years.

Geopolitical risks expand. The U.S., UK, Russia, Turkey, Italy, Spain, Mexico, North Korea and Brazil are among the actors playing out an ever-expanding geopolitical drama on the world’s stage. Global investors are becoming increasingly anxious, which has contributed to a major flight-to-safety — buying gold, Japanese yen and bonds of all stripes.
This might be the year when geopolitical risks dominate fundamental economic factors in global investment decision-making.

Emerging market currencies’ shine is dimming. There has been a marked erosion in the bullish sentiment of EM currencies, which has been in place since early 2016.
In February, we saw an important bearish reversal in a closely watched EM currency index — and it looks likely to move lower again in Q2.

The Fed’s new commander takes the wheel. In his first FOMC meeting as Fed Chairman, Jerome Powell marched the Fed rate up another 25 bps. His comments following the announcement, however, left analysts somewhat split between hawkish and dovish.
He faces an extraordinary challenge in carrying out a regime change that continues to wean the markets off central bank liquidity — while providing excessively low interest rates.

Germany forms a coalition government. The Social Democratic Party’s membership voted to approve a new coalition government with Angela Merkel’s Christian Democrats — clearing the way for Mrs. Merkel to start her fourth term as chancellor.6
She remains a powerful, stable force in the world.

Trump imposes tariffs on China. President Trump is moving against foreign “economic aggression” after deciding that China has pursued for decades a strategy of unfairly acquiring U.S. intellectual property. 7
This could be the first of many crackdowns against China’s unfair trade practices. China will no doubt keep the renminbi strong to avoid being labeled by Trump as a “currency manipulator.”

The Japanese yen short squeeze. We saw a sharp rally in the yen during March that was fueled by several factors:

Our forecast for the remainder of the year is for USDJPY to move higher as U.S. interest rates rise. 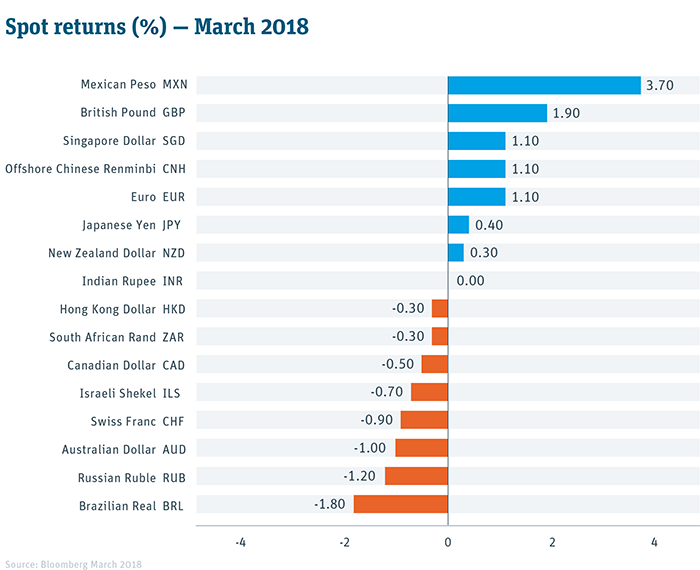