One year ago on July 1, 2018, Andres Manuel Lopez Obrador won Mexico's presidential election. The veteran leftist politician presented himself as an agent of change and secured a landslide win. Since then, the Mexican peso has become the strongest currency in the world (Table 1). As of today, it’s kept its place on top of the leader board for July (Table 2). 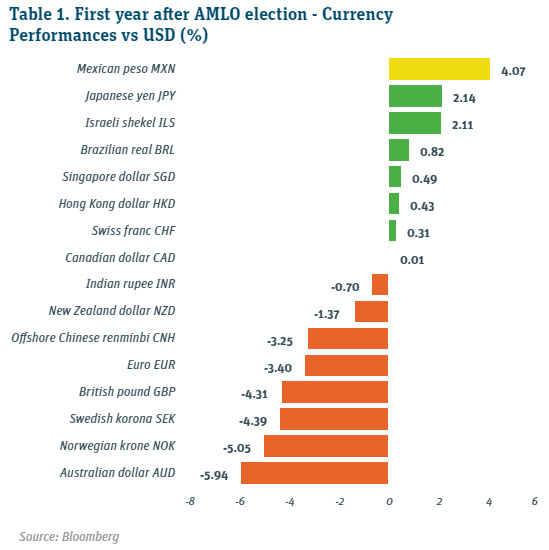 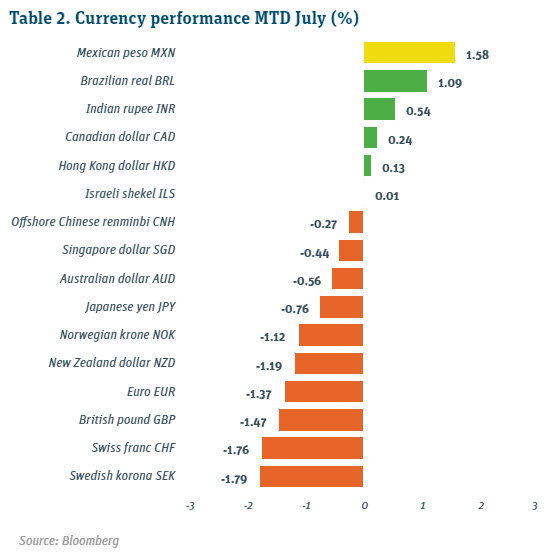 Here is a weekly chart of movements in the USD/MXN. We can see that the trading range over the last two years has been narrowing. Our view is that the currency pair will break below the supporting uptrend line and head towards a MXN 17-18 range. Within that new range lies the 50% retracement of the entire upmove from 12.85 to 21.60, and where previous key tops and bottoms also reside. The timing is uncertain, we estimate within 3-9 months. 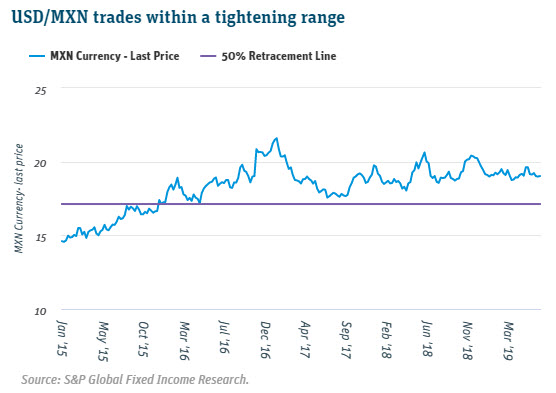 We are bullish the Mexican peso. However, further strength in the peso may be constrained by political uncertainty with Mexico’s new administration and by a slowing economy. We expect Mexico’s central bank to begin an easing cycle later in the year.

Mexico remains vulnerable to hiccups in US-Mexico trade relations. Yet Mexico has been a major beneficiary of the ongoing US-China trade war – in fact, Mexico now tops China as the biggest exporter to the US.

This signals a radical change in global trade: the US-China trade war is fueling the transformation of global trade, towards a “de-globalization” of supply chains. Cheap labor is no longer the dominant driver of production. Consumer demand for popular items such as clothing and electronics, along with the rise of highly customized products, is forcing manufacturers to locate production closer to their consumer markets. Mexico is right next door to the largest group of consumers in the world – the good ol’ USA, which makes us bullish Mexico and the Mexican peso.

Tactical hedging of MXN-denominated expenses is recommended if the USD/MXN climbs to 19.25-19.50 . Strategic hedging should be considered, as our longer-term view (1-3 years) is for a stronger Mexican peso and a weaker US dollar against all currencies.