The US dollar hit two-year highs in April, further boosting its status as a safe-haven currency during times of economic and geopolitical stress. The US economy continues to generate jobs, strong consumer spending and attractive investment opportunities.

Following Federal Reserve signals in January that interest rate increases may pause, the US dollar sank. It quickly rebounded however, supported by consistent growth in wages for US workers and robust consumer spending.

Financial markets in the US continue to attract global investors. With comparatively high interest rates and equity markets hitting new heights, global investors cannot afford not to allocate large portions of their portfolios to US financial assets. However, when uncertainty fades abroad, the US dollar could become vulnerable as global investors see attractive opportunities in Europe and emerging markets, where financial assets have lower valuations and offer the potential for potentially larger capital gains.

China’s primary economic initiative “Belt and Road” spreads beyond Asia and Africa and into the developed western world with seven EU members signing on. Although the UK has criticized China’s aggression in the South China Sea in the past, Phillip Hammond, UK Chancellor of the Exchequer, praised China’s Belt and Road for its size and scope, and plans to negotiate wider bilateral trade agreements with China, post Brexit. China holds plenty of British pounds and euros as part of its currency reserves, so not much impact for FX markets due to Chinese spending on infrastructure internationally.

Trump tries to set the stage for re-election in November 2020 by attempting to finalize his trade deals with China and the yet-to-be signed NAFTA replacement. The investigation into Trump’s ties to Russian meddling in the 2016 election continues to drag on, an issue Trump hopes will be forgotten by election time. Financial markets are betting the strong economy will continue regardless of who wins the White House next year. Should the US economy begin to show true signs of slowing, the Fed would be forced to cut rates and the dollar would suffer.

US trade talks with China will enter a new phase of negotiation that could become costly and contentious. Efforts to negotiate may be slow, as the Chinese team, recently blindsided by presidential tweets, may be unlikely to forgive the disrespect quickly. Trump may think he has the upper hand since China exports far more to the US than it imports. The fact is Chinese investment in US financial assets remains profound and has had a great impact in offsetting trade imbalances. Additionally, since the Chinese renminbi is actively managed, potential manipulation by the Chinese of their currency value remains an option.

Rise in oil prices threatens emerging market growth. Commodities are priced in US dollars on the world market. Historically, when the US dollar gains in strength there has been a corresponding decrease in commodity prices as commodity-importing countries renegotiate with commodity-producing countries.

Last December the price of oil, which strongly correlates with the Canadian dollar and other commodity currencies, came crashing down. Since the start of this year, the US dollar has strengthened, and the price of oil is up 40%. Unless the price of oil again sinks as it did last year, and/or the US dollar weakens, oil importing countries will pay more, and thereby see little economic growth. Higher oil prices will help the Canadian dollar, and hurt the Indian rupee and Korean won. Look for the loonie to gain significantly in strength if the NAFTA replacement gets ratified and oil prices remain high.

Brexit decision delayed but keeps FX market on edge. Financial markets are weary of the intricacies of the UK Parliament’s negotiations and attempts to settle on a Brexit deal. An agreement could come before the October 31 deadline and the FX markets remain alert for a headline at any moment that could move the pound significantly. The US dollar has benefited from the uncertainty surrounding Brexit. Once Brexit gets resolved, one way or the other, a removal of the uncertainly would likely hurt the dollar.

Spanish elections portend a divided Europe. This year, five political parties vie to govern Spain. Like much of Europe, anti-immigration and anti-globalist far right parties have grown in prominence. Traditional leftist socialist parties will try and negotiate with populist right-wing parties during this year’s European Union elections. Even though western European countries do not share the legacy of corruption and graft of some emerging economies, generations of privilege leave them deeply skeptical of globalization. Contentious elections can only hurt the euro.

The US economy is firing on all cylinders. With 263,000 new jobs added in April, employment numbers easily exceeded the 190,000 projected. Consumer spending continues to increase as wages grow more than 3%. The US dollar has been strong since mid-2018, helped by uncertainty surrounding other major currencies due to trade talks and Brexit. The dollar retains its status as a safe-haven currency. Steady growth of the US economy has led to the US dollar consistently outperforming every major currency worldwide. Should the US economy falter and uncertainty dissipate for other global economies, the US dollar will take a significant hit.

The Federal Reserve remains on hold. Following the FOMC meeting on May 1, Fed Chairman Powell stated there was no significant reason to raise or lower interest rates. Although not responding directly to White House criticism, Powell’s comment indicated the Fed’s steadfast view of keeping interest rates steady and watching economic data for any future trends. The dollar has remained strong since January despite the Fed clearly signaling that rates would not change in 2019. Prior to then, the Fed had signaled two rate increases this year. The dollar will suffer should other central banks around the world begin to raise rates while the Fed remains on hold. 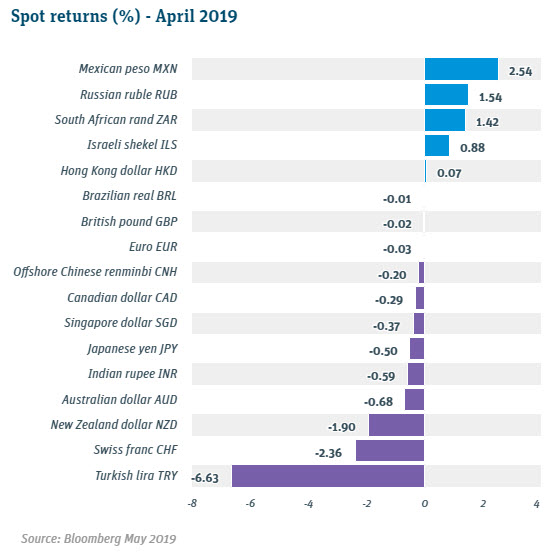 Subscribe to our Daily FX Updates to have currency news delivered to your inbox each weekday morning ET.

5 ways founders are rethinking their burn rate in 2023

Peter Compton is a senior foreign exchange advisor for Silicon Valley Bank’s global financial services group, and has been with SVB since 2007. He helps clients design and implement hedging strategies for foreign currency exposures. Compton has over 20 years experience in global financial markets.

Compton holds a bachelor's degree in business and management from the University of Rhode Island and a Master's of Business Administration from San Francisco State University.
You are now leaving Silicon Valley Bank (SVB)
You will be directed to a different website or mobile app that has its own terms of use, visitor agreement, security and privacy policies. SVB is not responsible for (and does not provide) any products, services or content at the third party site or app, except for products and services that carry the SVB name.
I understand, let's proceed Stay on SVB.com