Chart 1 below tracks the EUR/USD exchange rate and quarterly 1-year-ahead consensus forecasts for the period beginning March 2006 through year-end 2017. 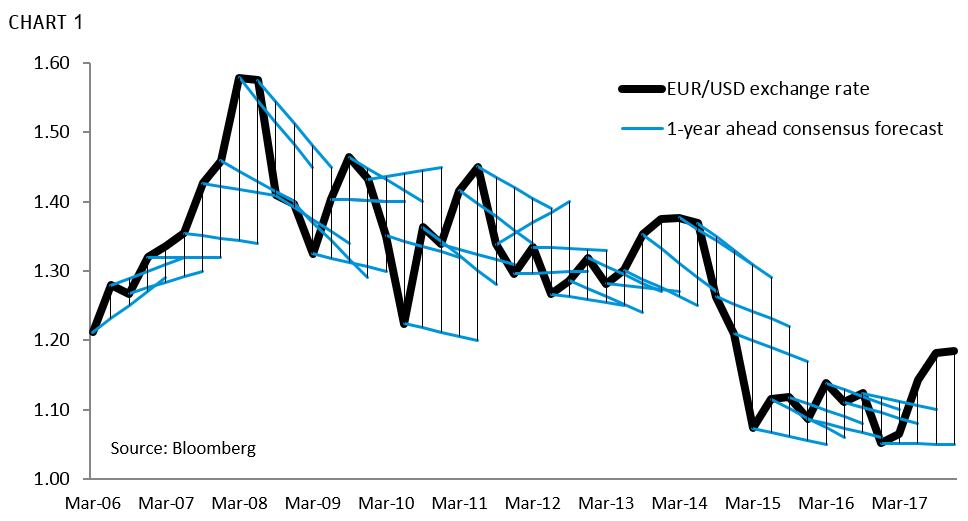 
Implication: During the pre-close analysis and due-diligence stage, do not use consensus currency forecasts2 to value the expected cash flows of an overseas deal. Rather, discount cash flows at prevailing currency forward rates. In doing so, you will incorporate differences in hurdle rates and risk premiums across countries and gain visibility about the economics of a proposed transaction.


Currencies movements over short periods are erratic, but can be sizeable over long periods

Chart 2 below reports the British pound to US dollar (GBP/USD) exchange rate (dollars needed for each pound) for the six-month period from March through August 2018. Resurging Brexit concerns resulted in a bearish couple quarters for the GBP. A more granular look, however, reveals the GBP rose 65 of 135 days (48.1% of the time) and fell 70 days — a statistical coin toss. Thus, over short periods, the movements are erratic, near random. However, the magnitude of the moves on down days was greater than that of up days and the sum of the individual daily changes over the longer six-month period was material, with the GBP dipping almost 10% v. the USD.

Implication: Yes, (as reflected in this example) there is about a 50 percent chance your global fund can benefit from an upside swing in currency exchange rates, but there is also about a 50 percent chance FX rate fluctuations will adversely impact your internal rate of return (IRR), measured in USD. Over time, the magnitude of that risk can be profound and material. You may wish to consider hedging strategies to insulate against value erosion.

For example, in December of 2008, the GBP/USD exchange rate was around 2.00. During that month, the value dropped precipitously. If you had pounds to sell but decided to sit on the sidelines waiting for a rate of 2.00 or better, you would still be waiting almost 10 years later. Similarly, as of September 2018, those waiting for the return of the GBP to post-Brexit lows of May 2016 are still waiting.

The story for funds going into emerging markets is even more grim, because it is increasingly unlikely that earlier currency prices will be revisited again in the near term. For example, in the chart below, the rate for the US dollar to Mexican peso (USD/MXN) has slowly drifted higher for decades as the peso has devalued. Regressing to 11 or even 13 pesos per dollar could take much longer than you may be able to wait.

Implication: If FX rates have gone against you following an overseas investment, and you wish to execute hedges to limit further losses, it is suggested that you do not wait for the market to come back. Act now and layer in, provided your materiality and exit visibility thresholds are met.


Currency correlations are time-varying and unpredictable 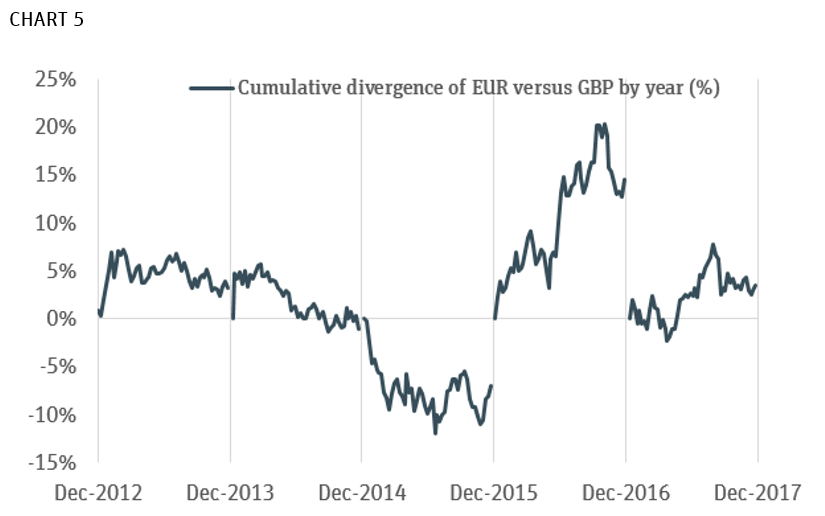 Implication: In general, currency diversification may provide some off-setting benefits, but diversification to manage foreign currency risk is unreliable and may not constitute comprehensive, prudent risk management. We recommend evaluating the currency risk of each investment individually and in isolation.

As venture valuations in the US are becoming increasingly expensive, fund capital will continue to go overseas at a rapid pace. Carefully consider how market fluctuations may affect your realized IRR, versus the pre-deal projected IRR. Even if the investment performs as you expected, the currency element may represent a material erosion of value. A prudent foreign exchange risk management strategy starts with a sensible view of currency behaviors and carefully considered vehicles for counteracting the risk of sudden and unexpected market upsets.

James Surowiecki, Plinko and Bloomberg are independent third parties and are not affiliated with SVB Financial Group.