Waiting for a warm-up

With all that happened in the fourth quarter of 2020 – COVID-19 vaccine approvals, a contested election result, and the continued pressure on consumer spending – many investors were entering January trying to avoid peaking cautiously behind, and instead looking forward to embrace the changes the new year would bring. January’s Georgia races ushered in a new, complex split Senate scenario and the inauguration brought closure after months of speculation. President Biden began filling his cabinet and started on the difficult path of providing stimulus and assistance to local authorities attempting to increase the pace of vaccinations. Wall Street squared off with Main Street as bulletin board traders targeted short sellers, creating a short-term period of volatility and longer-term questions as to the role of regulators in a new digital marketplace. Companies reported stronger-than-expected fourth quarter results as earnings season kicked off and the Fed and other central banks committed to maintaining easy policy and loose financial conditions – even if inflation manages to creep higher over the next several months.

While the economic data has deteriorated modestly, PMI readings indicate that the U.S. economy is still on a growth path. Specifically, manufacturing has been holding up better than the consumer over the last several months, but consumer data started to improve as the month closed out. The ISM Manufacturing index for January declined modestly versus December’s print, falling to 58.7 from 60.5 the prior month. While COVID-19 continues to cause some disruption in production, the reading is yet another indication of the relative strength of the manufacturing rebound versus the stalling evident on the consumer side of the economy. Apart from the strength of the report, the most notable aspect of the data was the sharp increase in raw material input prices, which rose to a level not experienced since 2011 – an indication that inflation may be a growing concern later in the year. As for the consumer economy, the January ISM Services PMI continued its march higher, rising to 58.7 from the original print of 57.2, with 14 out of 18 industries reporting growth. New orders and employment rose meaningfully during the month, while new export orders and inventories declined. Surveyed business owners indicated improved optimism, but cited continued local and state level restrictions and supply chain constraints as challenges.

While it is encouraging to see the improvement in the Services PMI reading in January, there are still indications that consumers are not yet “all in” on a return to normal life. Housing data has been the bright spot over the past six months, but investors should be prepared for some softening over the next few months. This is based on the fact that pending home sales fell for the fourth straight month in December, down -0.3% compared with November. The decline was attributable to continued supply constraints and higher prices, as inventories sit under the 2 million mark, representing the equivalent of 1.9 months of sales. Sales in the Northeast were the strongest, while the biggest decline was experienced in the Midwest. Even with the modest month-over-month drop, pending home sales were still up +21.4% year-over-year. Pending home sale data correlates closely with existing home sales, and as a result, we expect home sales data to remain soft for the next 1-2 months. Conversely, U.S. retail sales were down again in December, declining -0.7% from November, on widespread softness in discretionary spend. In addition, the November print was revised downward from a -1.1% decline to a -1.7% decline, as spending outside of gas, food, and housing continues to tumble.

The employment situation has done little to kick-start consumer confidence, with the recent retail sales numbers representing an example of this overhang. December’s non-farm payrolls report came in well below expectations, despite a decent ADP private payrolls report. Only +49k jobs were added versus a consensus of +50k; however, whisper numbers were much higher. While the unemployment rate fell to 6.3%, the participation rate fell to 61.4%, with women and people of color continuing to be disproportionately impacted by pandemic job losses. The November and December jobs reports were also revised downwards, with November’s gains declining from +336k to +264K, and December’s losses increasing from -140k to -227k - compounding January’s lackluster gains. Much of the enthusiasm coming into the second half of the year hinges on the return of lifestyle spend, as purchases of goods have not fallen as much as the decline in services, and a renewal of services spend will result in more meaningful job gains.

Returns in the capital markets in January reflected the pause that many investors were expecting as the second surge of COVID-19 was reflected in economic data. In addition, the speculative frenzy around the massive short squeeze of names such as GameStop and AMC created a burst of volatility and resulted in questions around the sustainability of equity markets trading at stretched multiples. The selling was not indiscriminate, however. Large cap, higher quality names in the S&P 500 and the MSCI EAFE indexes lagged, while pro-cyclical positions in small cap and emerging markets equities, as well as commodity prices, outperformed. The bond market is experiencing some pressure despite the spike up in equity volatility, as rates experience incremental pressure higher as forecasts for inflation and economic growth strengthen. 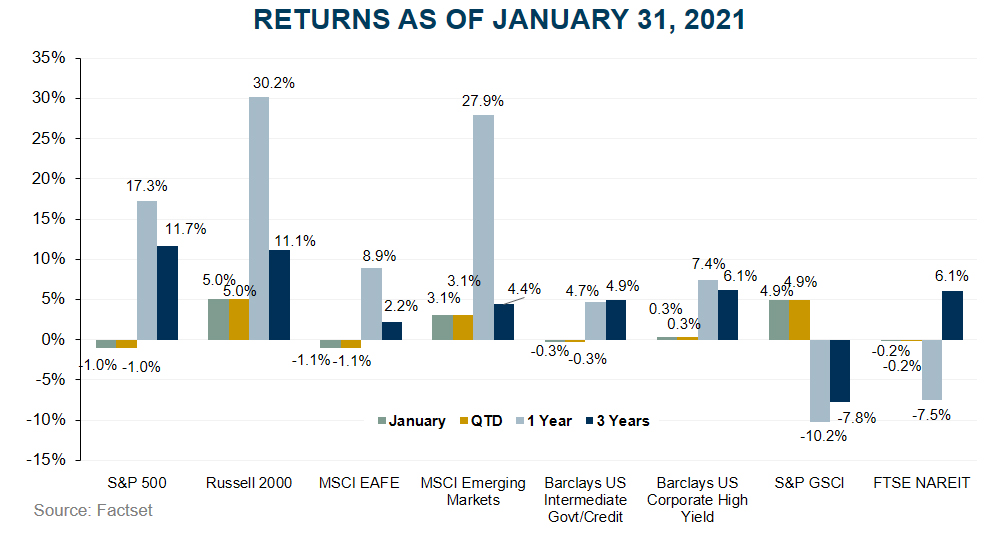 One of the outstanding questions as we move into 2021 is how will the dual-edged sword of cyclical rotation and enhanced scrutiny of big technology business practices impact the markets. The challenge of course is that any relative weakness in technology stocks, even if it is due to rotation, will have a disproportionately negative impact on the major large cap benchmarks here in the United States. In order to have very strong returns in 2021 in the S&P 500 and the Nasdaq, new investors and/or increased allocations to U.S. equities will need to occur in order to increase the pool of funds rather than just experiencing cannibalization within the market from defensives to cyclicals. Given the outlook for bonds, this is certainly a possibility. The other important factor to consider is the difference in the sector makeup of other indexes such as small cap and international indexes. These indexes tend to have lower weightings in technology than the S&P 500, and therefore may benefit more from relative outperformance of non-technology sectors.

The positive for technology companies, as laid bare by this quarter’s earnings reports, is that engagement remains high. The American consumer has proved a captive audience over the last 12 months and the growth of digital ad spend, which has been directly correlated with the rising value of companies such as Alphabet and Facebook, has continued essentially unabated because the targeted advertising offered by these companies works. There is no better way to capture an audience for a product or service than by employing an algorithm that allows you to target consumers who have indicated, even in a subtle way, that they are more likely to make a purchase. Amazon has created an entire ecosystem of sellers vying for the opportunity to appear in the ribbon of top picks on any given day. New streaming services are launching weekly, responding to consumer desires to curate their viewing experience and existing services are rewarded with new subscribers with every new binge-worthy series. The fear of missing out is real; the desire to remain culturally relevant may be attributed to millennials and Gen Y, but it extends well beyond that.

The negative, of course, is that a bipartisan effort to effect greater regulation on big technology companies may impact performance over the next several years. Increasingly, government officials in the U.S. and the European Union are voicing concerns regarding big technology’s access to data, and the reach of businesses that create an anti-competitive environment that demands greater scrutiny from regulators – regulators that have historically allowed these companies to acquire and grow inorganically. The combination of in-house innovation and acquisitions has produced a competitive advantage that will be difficult to unwind. However, a change in the regulatory winds could force these companies to work ever harder to innovate and continue to grow their revenues and earnings.

What we’re watching: vaccine optimism and a pressing desire in Washington to get life back to normal may be hampered by a new strain of COVID-19 variants.

Expectations for a meaningful second half pick-up in economic growth hinge on a rebound in consumer activity as well as an improvement in some of the supply chain challenges that companies are continuing to experience. Stronger variants of COVID-19 are becoming more widespread and could upset this narrative as we move towards spring.