Rolling with the punches

Optimism ran high through much of May and June, and while that optimism has faded a bit in the last few weeks, risk markets appear to be shrugging off the threats that lay ahead.

While April and May were marked with cries of a disconnect between markets and the economy, the economic improvement experienced over the last 8 weeks has provided some comfort that the equity markets may be pricing in better times ahead – consistent with historic recoveries. Much of the optimism around that recovery, however, is based on forecasts of improvement back to pre-pandemic activity levels within a short period of time. This exuberance centers on a pattern of higher consumer engagement, which begets hiring in the services industry and allows for businesses to avoid closure, marking an avoidance of the type of permanent economic impairment feared in March and April. The fundamental assumption is that through effective public health policy and a vaccine that the spread of Covid-19 is contained to an extent that it does not result in additional widespread shutdowns of the services economy. That assumption appears easier to apply outside of the United States right now, as coordinated policies have resulted in lower case counts, and reopening of those economies has continued at a measured pace.

As for the U.S. economy, July data continued to build on the improvement we experienced in May and June. The U.S. ISM Manufacturing index for July came in at 54.2, better than expected and up from the June reading of 52.6. The increase was led by improvement across the board, with increases in new orders, production, backlog and employment all moving higher. In addition, The U.S. ISM Services Index rose to 58.1 in July from 57.1 in June, reflecting improved sentiment from businesses involved in the services industries. One of the more interesting portions of the report was the decline in the prices component of the index, perhaps indicating that the supply chain disruptions which marked the earlier phases of the pandemic have eased.

Evidence of consumer engagement came in the form of U.S. retail sales, which after a monster May print were again better-than-expected in June, up +7.5%. The gain was led by another sharp increase in clothing sales, which were up +105% month-over-month. The increases across the board moderated as expected; however; as we move further out from the months of March and April, it will be harder for these comparisons to show such dramatic improvement. The housing market, too, has benefited from a move towards normalcy. Homebuilder sentiment was back to its pre-pandemic level of 72 in July, and the assessment of the strength of current conditions and expectations for the next six months were both meaningfully higher. Existing home sales, too, have caught up to the sharp increase in reports of mortgage activity; in June, they rose +20.7% from May. Home prices rose +3.5% year-over-year, and inventory fell by almost -20% as demand increased. Mortgage applications in the last two weeks have indicated that the spike in activity may be slowing modestly, as the pent up demand from the delayed spring season has likely dissipated somewhat. In addition, higher prices and supply constraints could put downward pressure on applications, but concerns about the strength of the U.S. economy as evidenced by weaker consumer confidence readings could also be partly to blame.

Indeed, while the data reported in July was solid, U.S. consumer confidence readings reflected the tick up in cases. The Conference Board’s index fell to 92.6 from 98.3, well below expectations for a 95 print. While sentiment around current conditions ticked higher, confidence that the next six months would bring improvement plummeted as consumers became increasingly concerned about the new wave of Covid-19 infections. Not surprisingly, pronounced declines were experienced in California, Texas, Florida and Michigan, and while consumers were still looking to buy a home, plans for other large consumer expenditures such as cars and appliances came down.

With the recent decline in confidence notwithstanding, the employment picture should allow for some optimism. U.S. non-farm payrolls rose by 1.763 million for the month of July, beating expectations for a gain of 1.48 million jobs. The U3 unemployment rate fell to 10.2%, down from 11.1% in June, and the U6 unemployment rate, which includes part-time and discouraged workers, fell from 18% to 16.5% during the month. Leading the growth were leisure and hospitality hires, followed by government and retail job adds. While the total number of unemployed persons in the U.S. remains 12.9 million above February’s level, the pace of recovery in hiring has been better-than-expected at the height of the crisis.

As for the markets, equities and bonds moved higher once again in the month of July, continuing the momentum from the second quarter. While the narrative remains focused on economic improvement from the reopening of businesses and relaxed social distancing mandates, the rebound in the capital markets is likely attributable to the two headed monster of monetary and fiscal stimulus. The returns during the month speak to the fact that this is still a stimulus driven response. U.S. stock markets have benefited from relative defensiveness in the performance of large cap growth names, and those stocks – particularly in the technology and communications services sectors - delivered once again. Firming economic data and a relatively better pandemic response have also improved investor sentiment towards international developed and emerging markets stocks, with the latter driven by gains in Chinese names over the last several months. High yield corporates have outperformed investment grade issues over the last two months, and even commodities have shown some signs of life as the threat of inflation of the back of yet another global liquidity infusion looms large. 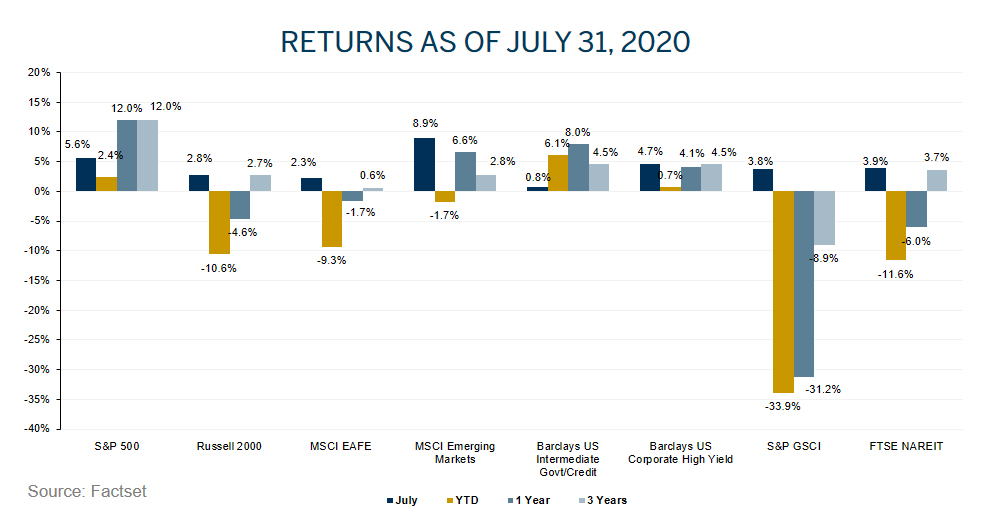 In focus: politics as usual?

At the time of this writing, Congress has been wrangling over what it is likely to be the last fiscal stimulus package directly related to easing the economic burden of the global pandemic here in the United States. And yet, despite clear evidence that the support provided by the CARES Act has resulted in a meaningful positive impact to the economy, Democrats and Republicans remain far apart on what means of support should be provided as part of this bill. While it may appear too many outside of Washington D.C. that this is yet another example of politics as usual, which we have become accustomed to over the last several years, this particular negotiation likely goes beyond the typical jockeying for the upper hand.

So why is this negotiation so critical for both parties? Because this is probably the last major action until after the election in November. This is the last opportunity for policymakers in Congress to try to achieve some level of credibility in what has admittedly been a disastrously handled national emergency. The first packages and the CARES Act were not all smooth sailing, but at least there was a sense that fiscal action would get done, and it was. This time around, the Democrats need to deliver state and local aid to their home states, many of which were decimated in the first few months of the pandemic. Republicans want to ensure that businesses are protected from lawsuits, and that expanded unemployment benefits do not create a disincentive for workers to return to their jobs, while still creating a safety net for those who cannot find work. And everyone wants to create a foundation for small businesses to survive, and for further support to fight the virus.

Politics as usual is often upended in times of crisis, but this election could be a turning point for the next 8 years, and neither party wants to be on the wrong side of history as it relates to helping the American working class in a time of need. Coming out of the deepest economic contraction experienced in our nation’s history, politicians will be judged on their efforts to right the ship, and the opportunity for all of us to cast our votes is just a few short months away.

What we’re watching: one thing is for sure – we are better off than where we were a few months ago, but there is a long way to go from here.

Confidence and sentiment are fickle friends to the markets, and investors have been riding a wave of optimism that hinges on a great deal of things going right in the next few months to justify the ground made up in such a short time. An effective vaccine will help to catalyze further risk taking, but could also force investors to consider the potential overhang represented by U.S.-China tensions and higher taxes going into 2021. For the economy to overcome the low growth environment in which we have been mired for the last several years, companies will need to reinvest and pursue innovative strategies, while balancing the desire to maintain strong balance sheets and insulate against the unknown.