Investigating paths through the economic uncertainty

The intersection of policy and the economy has never been more in focus than it has during the pandemic period, as economists and investors attempt to gauge the long-term implications of massive fiscal and monetary stimulus coincident with a sharp snapback in economic activity. Coming into 2022, the challenge facing the global economy was the threat of persistent inflation, something developed economies had little experience with during the prior decade.

Prior to the financial crisis, the hyperinflationary period of the 1970s occupied meaningful headspace for economists, as it represented one of the most difficult periods in the U.S. economy. The post war boom created a wage-price spiral which saw ever increasing labor costs offset by higher prices for end products, a phenomenon which came to a screeching half following President Richard Nixon’s decision to enact wage and price controls, tax imports and end the gold standard. These moves prompted companies to lay off workers, which slowed consumer demand even as prices remained high, thus creating the trifecta of slowing growth, high unemployment and high inflation, which a confusing Fed policy did little to help. 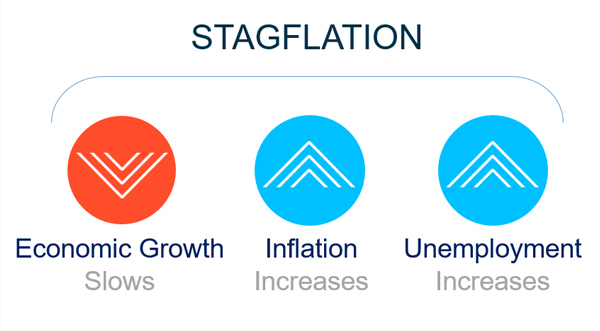 So why are we discussing stagflation in today’s economy? The labor market remains strong, with a historically high number of job openings. Wages are moving higher on a nominal basis, but the pace of the increase in wages slowed over the last month, and real wages have essentially been flat to negative for much of the last decade. The steamy year-over-year growth enjoyed by the global economy in 2021 is going to slow, however the economy is still expected to grow above the pace set in 2019.

Higher prices, therefore, represent the tie to the stagflation environment experienced almost fifty years ago. The argument is that the Russian invasion of Ukraine has created an environment that will exacerbate the supply chain disruptions that have resulted in higher prices, and the even higher inflation in food and energy prices will result in depressed consumer demand.

This idea of broad demand destruction is the rationale for stagflation fears and is not without merit. In our view, this outcome would require a broad scale military conflict involving a number of large countries as well as the expansion of sanctions and other financial impediments to commerce.

In a less extreme scenario, demand destruction could occur in countries or regions which are more vulnerable to disruptions of food and energy supplies from Russia and Ukraine; this has led some investors to reconsider their allocations to Europe for the remainder of the year, for example. Our view is that this situation is still evolving, and the relative attractiveness of international developed equities is likely to persist even with the near term challenges represented by the Russia-Ukraine conflict.

Investors hunt for opportunities as stocks continue to struggle

The constant pressure on U.S. equities that has been in place essentially from the start of 2022 has been deep and wide in terms of its impact. What began as a pullback for growth stocks experiencing a sharp rerating based on expectations for higher interest rates has now spread to almost every sector. Energy stocks are benefitting from a precipitous move higher in commodity prices as fears of supply disruption spread, however the outlook for other sectors, which admittedly reflect a much higher weighting in the index, are murky.

Coming into 2022, there was an acknowledgement that economic growth, higher yields, and an emphasis on cash flows would likely accelerate the reallocation of portfolios to more cyclical sectors, and in particular, to financials, industrials and consumer discretionary. These companies tend to perform well when the economy is growing and the yield curve is appropriately steep and shifted higher.

With Russia’s invasion of Ukraine, the pressure has extended to these sectors, and has been notably painful for financial stocks over the last two weeks. The 10 Year Treasury yield has come down markedly from its recent high of 2.05% on February 15 to 1.85% as of this writing. Over that same period, U.S. financial stocks, as represented by XLF, the Financial Select Sector SPDR® ETF, are down over -10%, while the S&P 500 is off by a little less than -6%. This contrasts sharply with the quick start to 2022 for the sector, which was outperforming the S&P 500 by almost 9% during the first six weeks of the year. A flight to safety pressured Treasury yields lower, and fears of slower growth also weighed on the yield curve, which then dampens the outlook for large banks who benefit from a steeper curve. Compounding the move in yields is the potential for slower economic growth, just as many banks are expected to grow their loan books based on higher demand. 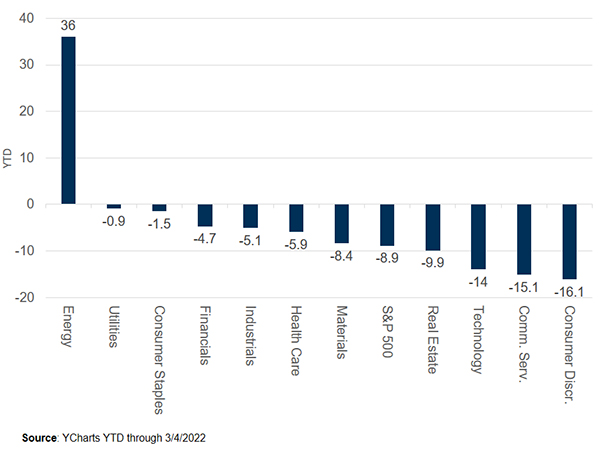 Even with the overhang of the Ukraine conflict, the Fed is going to adopt more accommodative policy in the coming months, and the yield curve is likely to move higher on those decisions. A protracted risk off move in our view is unlikely, and therefore any near term weakness in financials on concerns of Russian default contagion or a flattening yield curve is more than likely a short lived phenomenon.

The economy, particularly the U.S. economy, is likely to continue to grow, albeit at a slower pace, however the demand for credit for both households and businesses will remain robust. In the interim, however, the dueling risks as represented by the Russia-Ukraine conflict and tighter monetary policy point to equity markets that are increasingly narrow in the opportunities presented, and as such we expect both growth and cyclical stocks to face near term pressure.

Since the Fed made the decision to adopt a zero interest rate posture due to the economic devastation that resulted from the Covid-19 pandemic, lower quality bonds have been in demand, offering higher yields in an environment where there has been little pressure on issuers in terms of the threat of refinancing at higher rates. While spreads expanded in the spring of 2020, they came in quickly as the Fed made the decision to support corporate bond issuers through direct purchases on the secondary market, providing comfort even for holders of lower quality issues and allowing markets to continue to function efficiently and liquidity to be available.

With the sharp movement higher in the yield curve, however, our view is that investors are likely to begin reallocating to higher quality bonds over time, particularly as lower quality issuers face higher rates for refinancing their debt over the next several years. In addition, with tighter monetary policy and more limited fiscal spend, the support that the high yield bond market was afforded over the last two years from an investor sentiment perspective is likely to wane, and issuer fundamentals will be more in focus.

Balancing the need for income versus the potential for capital depreciation in fixed income is not a new challenge. Our approach is to balance that trade off, through overall portfolio construction, and reallocate towards higher quality issues over time as the movement in yields justifies that action. 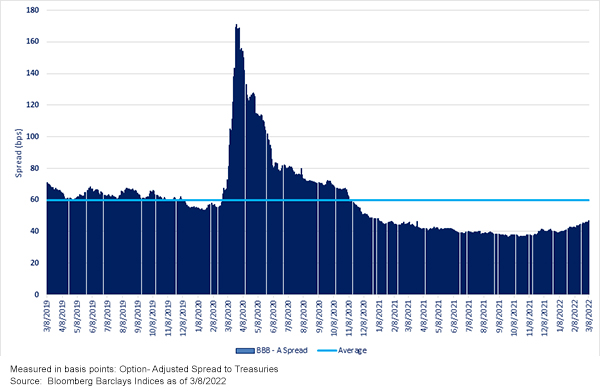