Central bank easing: to infinity…and beyond?

While October delivered solid returns across the spectrum, returns outside of the United States in the month of November represented some of the as yet unresolved issues during the period, along with a modestly stronger dollar.

The S&P 500, along with the rest of the U.S. equity market, ripped higher in November as economic data stabilized, the sentiment around a China deal improved, and the consumer remembered that it was time to start holiday shopping – or so it seemed. The brief rotations to value names experienced over the past several months were once again overwhelmed by investors plowing money back into their winners on the growth side. Outside of the U.S., European names were slightly weaker, perhaps reflecting the continued uncertainty surrounding the upcoming U.K. election, which will have a meaningful impact on the Brexit negotiations. Japanese stocks were the biggest laggards, with a weakening yen reflecting the expectation that the Bank of Japan will be hard pressed to change its policies anytime soon, with inflation still falling way below the +2% target.

Bonds, for their part, were mixed, with U.S. government issues trailing corporate bonds against the risk on backdrop. Despite the short term underperformance, the modest steepening of the curve reflects an improvement in expectations for global growth, as recession fears have abated, at least for the next 6-12 months. Indeed, the economic data announced in November and early December appears to point to a firming in the global economy. Non-farm payrolls in the U.S. – critical given the support the consumer has provided over the past 2 years – were better-than-expected for both October and November, and the unemployment rate now stands at 3.5%, as wages plod methodically higher. Outside of the U.S., improvement in manufacturing PMIs in both France and Germany over the last month are perhaps evidence that the perceived bottoming in the U.S. and China in manufacturing is spreading. Supportive of future strengthening in Europe is both the accommodative stance of the European Central Bank coupled with indications that large European economies such as the U.K. and Germany could pursue more stimulative fiscal policy – a sharp departure from the austerity which has dominated the region since 2011. 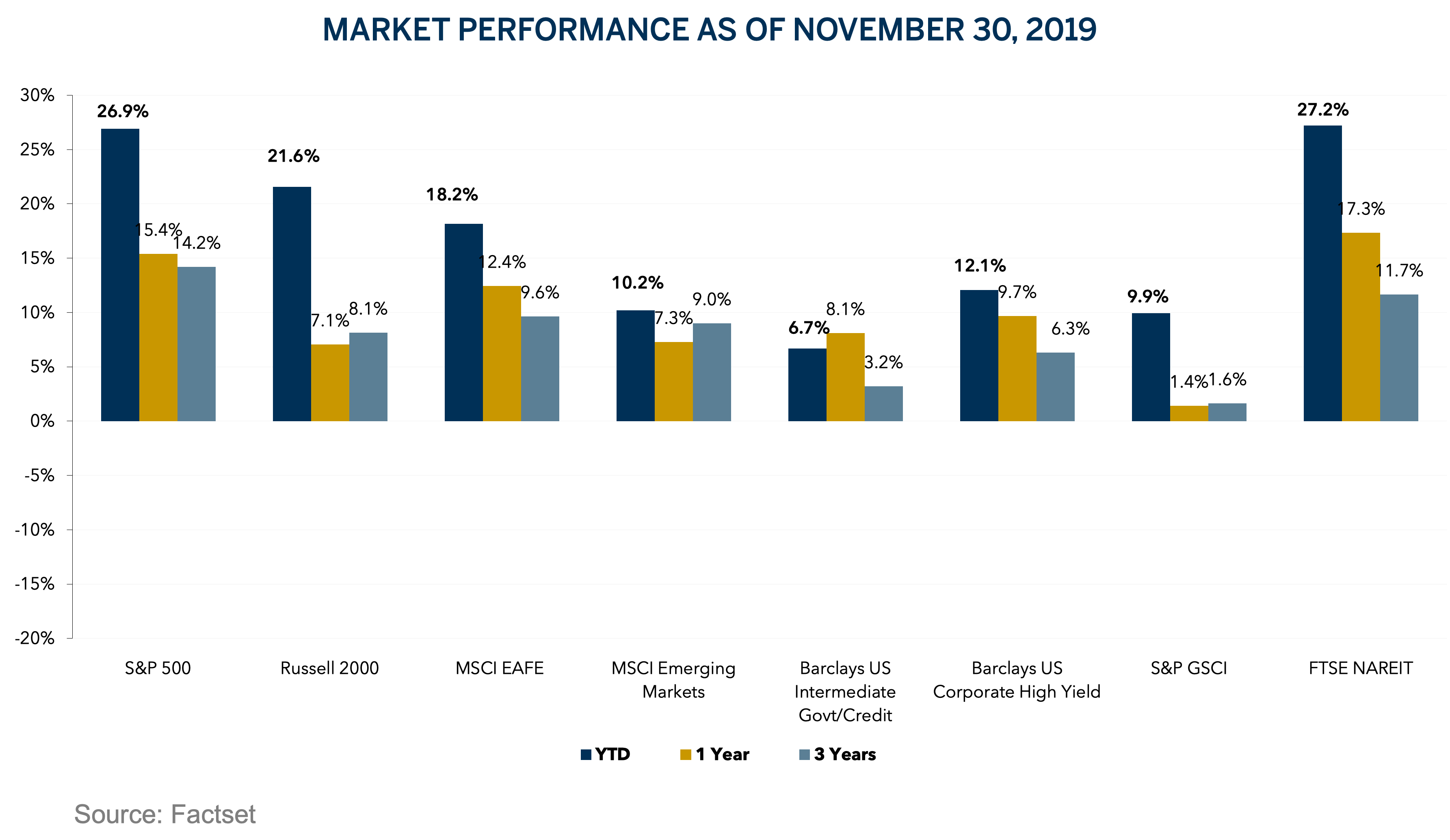 As 2019 comes to a close, it is time to look forward to 2020, and lay out the potential challenges and opportunities which could face investors in the coming year – both of which are much different than anticipated even a year ago.

The most critical change that has occurred over the last year was a modest softening of the global economy, and the response of global central banks to that softening. At this juncture in the economic cycle, investors fully expected central banks, at least in Europe and the United States, to be rolling back stimulative measures such as bond purchases and maturity reinvestments, and increasing rates. A broad deceleration in manufacturing activity and persistently below target inflation led to a shift this year, despite the fact that financial conditions at no point became overly restrictive. This floor of support, which has been in place in all of the major developed economies since 2012, has created a renewed enthusiasm for risk assets, allowing stocks especially in the U.S. to appreciate to increasingly lofty valuations. It has also created concerns around what tools can be applied should the economy soften again, and we enter into a phase of deceleration culminating in a recession – even if it turns out to be shallow, the toolkit still appears limited.

Of course, if we do not slip into recession, then the allocation to risk assets will be rewarded, even if the returns are not as strong as what we have enjoyed in 2019. There is some evidence that we are perhaps setting up for a similar scenario to what the U.S. economy experienced in both 2012 and 2016, when leading economic indicators declined close to the mark for contraction, and then rebounded, setting up a scenario in which equity markets were able to post strong positive returns over the following 12-18 months. In addition, it typically takes time for the impact of rate cuts to transmit to the economy, and we are not even a year out from the first rate cut of this “mid-cycle adjustment”. Non-U.S. risk assets could benefit as well, particularly if the dollar stabilizes or weakens, and if global growth inflects to the upside supported by diminished trade tensions and easy financial conditions, it suggests international equities levered to export growth (i.e.; Japan, S. Korea, Germany) have room to outperform their U.S. counterparts. Even credit, which appears somewhat overvalued, could perform well, particularly in the first half of the year, as the global economy and company fundamentals support the corporate bond market. 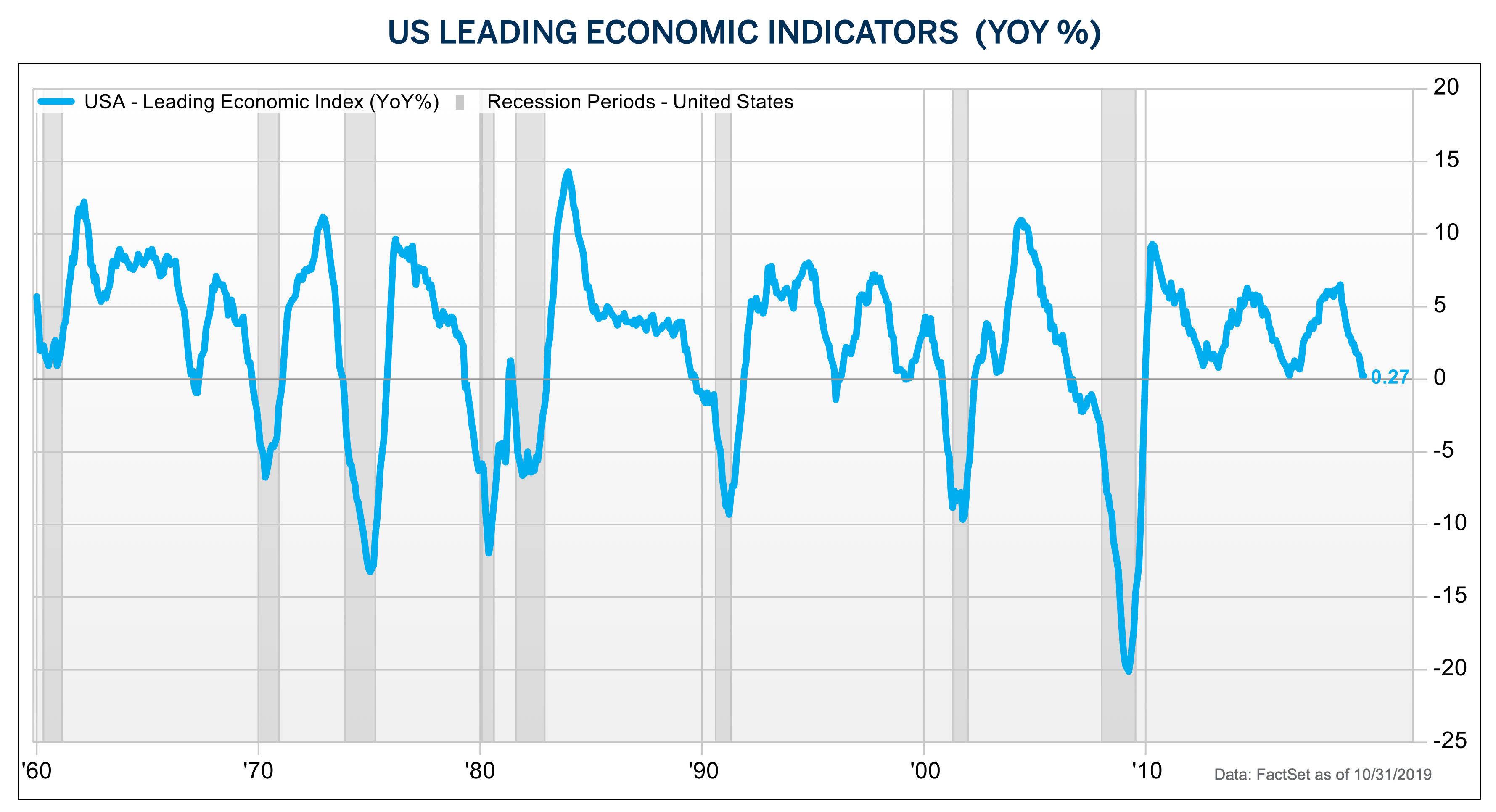 What we’re watching: As the year closes, there are a myriad of conclusions that can be made about why equity investors fared so well despite the potential landmines we identified early in the year.

China, monetary tightening, Brexit – all were potential issues as we started the year. Add to that list the uprising in Hong Kong, shifting military policy in the Middle East, and changes in the demand for commodities, and it would not have been surprising to see risk asset holders take some of their profits and hide out in safer havens. However, with cash yields falling as the Fed cut rates, and bonds continuing to offer little in the way of yield across the curve, investors found solace in the relative attractiveness of those risk assets, pushing valuations to higher levels in the beloved growth sectors, while punishing those areas of the market that still reflect the above mentioned uncertainty such as energy stocks. New challenges await investors in the new year, but we believe the most important will be the analysis of whether we have truly hit a near term trough in growth activity, and if this resilient global economy can bounce back once again, rather than decelerate into recession.