Higher prices have become a pervasive theme… even if we’re not sure how persistent they may be.

“The reports of my death are greatly exaggerated.”

This quote by Mark Twain – which is actually a misquote, but that’s for another time – can also be attributable to inflation, which came roaring back in 2021 to levels not seen since well before the financial crisis, occurring on the heels of the bursting commodity and housing bubbles in mid-2008.

Prices were expected to rise as the global economy re-accelerated in the back half of 2020 and unforeseen circumstances exacerbated the issue. The disruption caused by the COVID-19 pandemic to supply chains has compounded the demand effect and created a scenario in which consumer prices are increasing at what many feel is an alarming pace. This is a sharp departure from the decade between 2009 and 2019, when central bankers were facing the threat of deflation and were contemplating a scenario by which tools such as a negative interest rate posture might need to be employed. Today, policymakers and central bankers alike are hard pressed to find answers to this problem. So the big question is, how will the story play out in 2022?

The Fed to cast an eye on inflation once again
Whether you love or hate the Fed, everyone knows you can’t fight it – and this mantra is especially salient during periods of policy change, which is where we are today. Historically, the Fed used interest rates as its primary monetary policy tool, since 2009 however, the Fed has been forced to be more flexible and creative when it comes to tools used to target inflation and maintain maximum employment. Prior to the financial crisis, the Fed raised rates in response to inflation moving steadily higher than the 2% target (as measured by personal consumption expenditure or PCE), with fed funds rate hitting 5.25% in mid-2007, and declining to the lower bound of 0% to .25% by January of 2009. With 2009 unemployment still high and inflation hovering around or below target, the Fed maintained an accommodative stance through early 2016, at which point interest rate hikes began – despite inflation which was well below the 2% target at that point. And rates continued to move higher through 2019 – a tightening cycle that came to an abrupt end in March of 2020, as shown below: 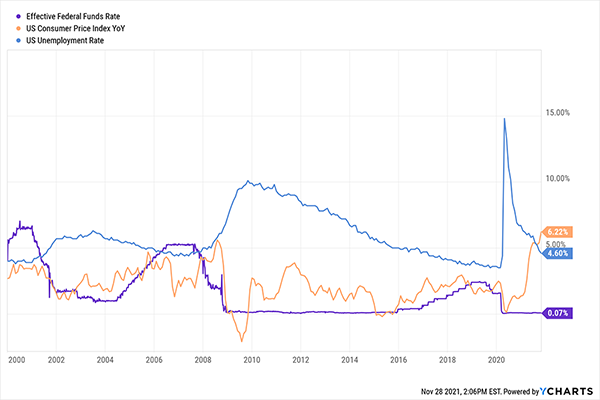 Now, investors face a new tightening cycle, as the focus shifts back to inflation, more akin to the situation in 2007 than in 2016. The Fed will be hard pressed to ignore inflation next year as the PCE inflation rate could still be well above the 2% target by the end of 2022. But what if the PACE of inflation continues to decline throughout the year, as expected? The Fed indicated that it would be comfortable with inflation running hot, especially after the last decade. Supply chain disruptions should ease and the burst of pent up demand is likely to have waned by that point, taking the wind out of the inflation sails. Should the economy continue to perform, the Fed could tighten at a faster pace, but coming from such a low level, it is unlikely that the pace will be fast enough to stall out the economic recovery altogether.

Despite concerns over increasing prices, consumer activity strengthens
The Fed may have been comfortable over the last several quarters with inflation running a bit hot, but if you ask the American consumer, inflation is definitely not cool. What started with price gouging for household goods has morphed into a scenario in which almost every part of the consumer basket has experienced rapid price increases – albeit from depressed levels during the pandemic. (Remember when you could get paid to take delivery of a barrel of WTI crude?) Not only are goods being delayed, higher shipping costs and a supply and demand mismatch in the labor market are forcing suppliers to raise prices at each stop in the production process, resulting in higher consumer prices. The higher prices and, to a lesser extent, continued COVID-19-induced fear have weighed on consumer confidence more recently, with November’s Conference Board Consumer Confidence index declining to 109.5, from 111.6 in October. Marking the lowest level in almost a year, the measure indicated that consumers’ assessment of current conditions and the outlook for the future deteriorated during the month. 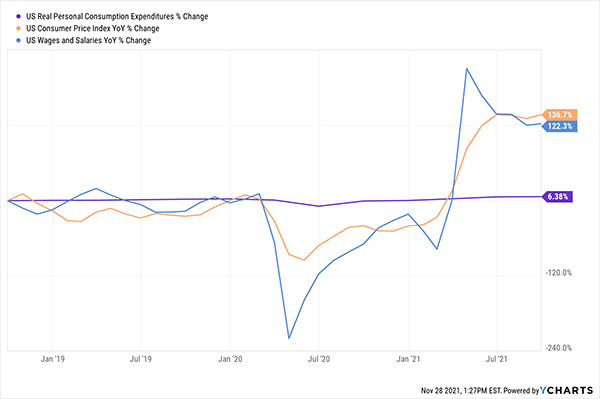 Part of that could be attributable to the higher price of goods however, overall consumer demand coming out of the depths of the pandemic-induced recession has been robust. Retail sales in September and October were better-than-expected and reflect the reality that improvement in the employment market has been swift and significant, with 10 million job openings for roughly 7.5 million job seekers. Wages have finally started to rise after a decade of inertia. If wage growth accelerates, the impact on the consumer could be muted – even if prices settle at a higher level.

As interest rates rise, there may be consequences for long duration stocks
If the Fed starts to move and the consumer keeps on spending, what does it mean for the equity markets? Historically, equity prices have exhibited positive correlation with inflation. That’s nothing new and, for most long-term investors, putting a meaningful proportion of liquid assets into the equity markets and letting them work their magic is the best way to protect purchasing power. Strong economic growth typically results in higher prices and higher interest rates, dynamically through market forces and eventually via the Fed when it tries to turn on the lights at the end of the party. But what if the equity market is dominated by growth stocks, as it is today in the U.S.? Technology stocks represent the largest sector of the S&P 500 by weight, at almost 30% and over twice the weight of the next largest sector. This percentage has grown over the last decade, as investors piled into growth stocks amidst low rates and low levels of economic growth.

These long duration stocks – a term which describes the expectation that a large percentage of a company’s cash flows will come in the distant future – are now feeling pressure, especially when yields are increasing at a rapid pace. One such period occurred earlier in 2021 and technology names significantly underperformed both the broad market and stocks that can benefit more directly from higher rates such as financials, as shown below: 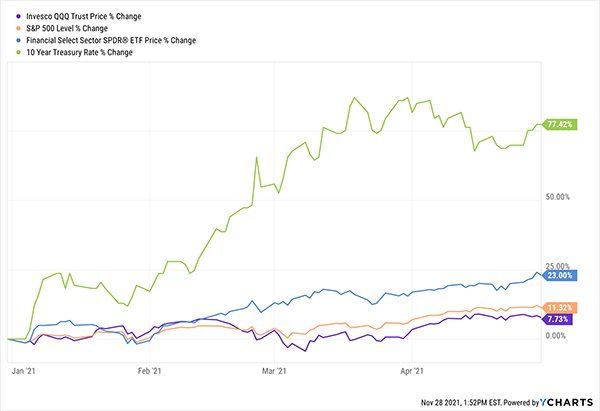 Any extended rotation away from long duration stocks could result in greater divergence in the public markets and create a less supportive environment for innovative private companies to enter the public markets, through a traditional IPO or via a SPAC acquisition. With companies staying private longer than ever, the potential ripple effects of higher inflation and higher interest rates for founders, employees and investors over the next year cannot be overlooked.

Inflation is here to stay, but one could argue that’s far better than the alternative. Economic growth begets higher demand, higher demand creates the need for higher production of goods and expanded services and companies must work to increase the level of activity. Like a spring, consumer demand bounces off the bottom in a recession and the pace at which that bounce back occurred over the last year has created a scenario which has stressed every part of the supply chain. Couple that with an already muted level of manufacturing activity coming into 2020, and one can see why the Fed believed that inflation was likely transitory.

Our view is that prices will begin to moderate as we move through the first half of 2022, and interest rates will move higher on stronger growth and Fed tightening. CPI could end next year still higher than 3% however, more of that increase will be driven by the pass-through of stickier costs, such as wages and healthcare, rather than shipping costs and port delays. Volatility will increase as investors assess the Fed’s intentions, and history reminds us that equities often trade down ahead of a tightening cycle, rather than at the peak of it. Longer term, our view is that innovation and exposure to areas of the global economy aided by secular tailwinds create the best opportunity for investment – even if the prospects seem dimmer on a relative basis in the near term for certain industries and sectors within that universe.