While the world remained in the grips of COVID-19 through the month of April, a slow thawing of the bond markets and a sense that historically low levels of consumer activity could not persist forever brought risk investors back into the market.

While the markets responded positively after March’s sharp declines, economic data released in the month of April reflected the historic impact of a coordinated global pandemic response on the U.S. economy. While data coming out of China and Europe was also downright terrible, the magnitude of the impact of COVID-19 on U.S. output and jobs is staggering – and the data doesn’t yet reflect the full impact of social distancing and shelter-at-home orders that remain ongoing. For example, U.S. GDP for the first quarter fell -4.8%, reflecting the dramatic downdraft in consumer spending activity in March. Expectations were for a -3.5% drop, and the reality is that the -4.8% is likely to be revised even lower in the next release. Not surprisingly, consumer spending fell -7.6% in the quarter, with durable goods off -16.1%, and services down -10.2%. This print was the worst since the first quarter of 2014, and while it is not as bad as the prints experienced during the 2008-2009 financial crisis, the second quarter GDP decline is likely to eclipse the worst of that period, in which GDP fell -8.4% in the fourth quarter of 2008.

As for output, the U.S. ISM manufacturing index fell to 41.5 in April, down from March’s 49.1, but better than expectations for a 36.7 print, which would have been closer to the recent lows experienced in Chinese PMI. More challenged was the ISM non-manufacturing index, which measures consumer activity, and fell to 41.8, from 52.5. This marks the lowest print for the measure since December 2009, and the first in contraction territory (which is any print under 50) since the last recession. Lower levels of business activity, new orders, and employment all weighed on the index, while increases in supplier deliveries and prices reflected the challenges of supply chain disruptions resulting from COVID-19. Perhaps the most anticipated piece of economic data was the non-farm payrolls report. For the month of April, payrolls fell by 20.5 million, consistent with weekly jobless claims data over the course of the last month. The U-3 unemployment rate rose to 14.7%, its highest post-war level, while the U-6 unemployment rate, which includes part time workers and those considered able to work but not actively seeking a job, rose to 22.8%. In addition, the participation rate fell to 60.7%. Wages rose by +4.7%, but likely reflect the outsized losses in low wage jobs, rather than inflationary pressures. Somewhat promising was the fact that over 18 million of the jobs lost were deemed to be “temporary” losses; however, the ability of these jobs to come back online likely hinges on the success of reopening efforts.

Yet, despite all of this seemingly dire economic data, risk assets were up across the board in the month of April, as investors essentially brushed off what is likely to be incredibly challenging economic data and earnings in the first two quarters of 2020, and focused on the opportunity for a consumer led recovery in the back half of the year. U.S. stocks led the way forward, as the dollar remained relatively strong despite the massive increase in the federal deficit that will result from the stimulus packages enacted over the last 6 weeks. European and emerging markets stocks rallied on improvement in the spread of COVID-19, and credit markets rebounded as well – albeit to a lesser extent than the gains experienced in the equity markets. Commodities remained under pressure as structural issues in the oil market – namely, way too much supply, and not enough demand – created the backdrop for WTI crude to drop into negative territory for the first time ever. While the gains in April have continued into May, investors appear skeptical that this disconnect between risk markets and the economy can persist. 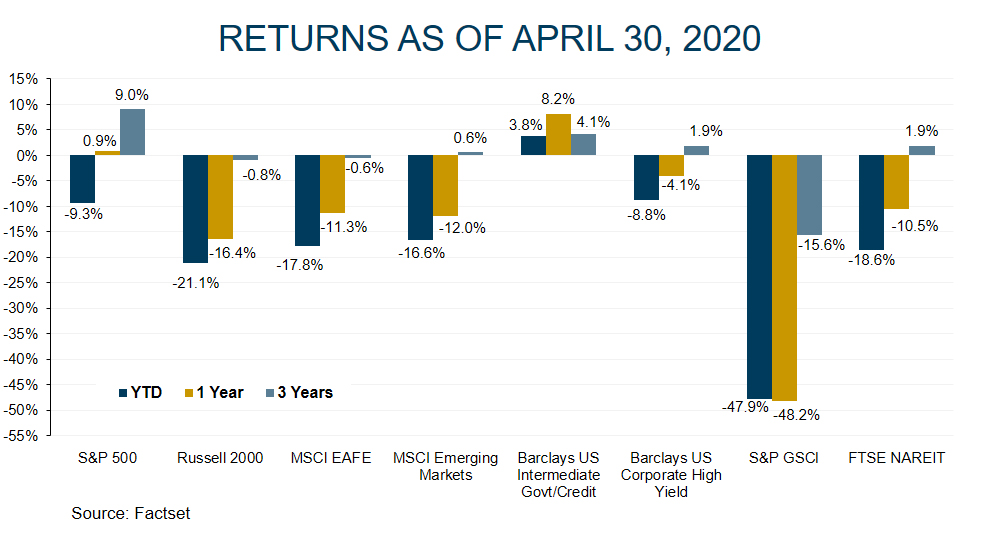 In focus: a tale of two citizens

While it incredibly difficult to determine when the markets have hit their very bottom – unless, of course, you are looking at all the signs in hindsight – there are often catalysts during challenging economic times that create opportunities that lead to the next great expansion. The challenge in this environment is that the force that supported the growth of the economy over the last decade – the U.S. consumer – is being handcuffed now by massive unemployment, and limitations on behavior. Of course, the two forces go hand in hand – the job losses endured by servers, hotel staff, and transportation workers were the result of social distancing edicts designed to prevent the spread of COVID-19. So, one might argue that the reopening of the economy is that catalyst, and the reaction of consumers to the reopening, and how an extended period of sheltering at home has changed them, could offer investors the next wave of opportunity.

With that said, the biggest risk to the market gains described above is that consumer spending does not accelerate and approach its previous level. There are two paths to this outcome. One, the economy is reopened, but due to the lack of a proven standard of care and/or a vaccine, consumers adopt modified social distancing as their new normal, thus avoiding large crowds, restaurants, malls, etc. The second path is that consumers abandon the restrictions entirely, and embrace a lifestyle and spending pattern which closely resembles pre-COVID-19. This could lead to a second wave of infections, which could then result in renewed caution – see the first option. There is little that can move the economy forward the way the U.S. consumer can, and that is why all of the focus will remain on how and when we move from job losses to job gains, and the pace at which the service economy can recover.

While volatility has subsided, plenty of clouds loom on the horizon.

As the credit markets will tell you, you can’t fight the Fed; throw in the largest U.S. fiscal stimulus package of all time, and you’ve got a pretty strong tailwind. While we believe the worst is behind us, and that equity markets are unlikely to test their March lows, there are many small and large businesses that will not survive this massive demand shock. With those closures, job losses turn from temporary to permanent. The need to move quickly - towards a standard of care, towards a thoughtful reopening protocol, and of course, towards a vaccine – is felt by all of us, and a misstep in the coming two months could result in a much longer, deeper recession.