A part of the Q2 2021 Market & economic insights series

The first quarter of 2021 set the stage for a revival in confidence, economic activity and hope which is likely to propel the economy and global markets through the rest of the year. While we acknowledge the reality that Covid-19 is here to stay, and that we will be grappling with this virus and its mutations for years to come, the meaningful, sustained progress in terms of treatment and prevention of the spread of the virus has created the backdrop for an economic rebound unlike anything experienced, at least here in the U.S., since the post-war era. The bifurcation between different types of workers over the last year has produced a clear K-shaped recovery. Unemployment has remained high among service sector workers, while industries such as professional services and technology have been only modestly impacted, and areas such as construction have experienced a boom.

Overall, however, economic data in the United States, China and even Europe improved markedly over the course of the first quarter. Yet, the focus for economists and market participants seems to keep circling back to causation. With the Fed and other central banks seemingly locked into an accommodative posture for the coming quarters, the narrative that the markets, particularly the equity markets, cannot continue without this monetary policy crutch is one that continues to dominate for those who believe the market has come too far too fast after such a dramatic, concerted global decline in activity. Fears of a taper resulting from higher inflation created a meaningful spike in volatility in the first quarter, and the perception that the Fed could pull the punch bowl back too early is likely to fuel more pops in volatility over the coming months.

Important to note, however, is that the Fed has a dual mandate. Unlike the European Central Bank, which is focused on achieving and maintaining inflation targets, the Fed needs to focus on employment as well – and the labor market is not yet back to where it was pre-pandemic. In fact, while payroll growth is beginning to accelerate, the unemployment rate in the hardest hit sectors of the service economy are running around 2x the broad unemployment rate. Wage growth was challenged prior to the pandemic, even in an environment where the unemployment rate was historically low, so it may be that the Fed will be willing to look through the transitory bump in inflation, and instead set its sights on the labor market as the cue to change its posture.

Of course, an improving employment environment would compound the effects of the demand rebound which is already anticipated for the second half of 2021. The savings rate reported in February in the U.S. was almost 14%, and as social restrictions ease, that savings could translate quickly into spending. In addition, some of that savings could be unlocked if Americans begin to feel more confident about the future, and that is closely tied with how people feel about their jobs and more importantly their ability to find a new job if they so choose.

So, what is worth watching? As leading indicators go, the ISM surveys are right up there in terms of importance. The manufacturing rebound is in full swing, and more recently, the services economy has caught up. The ISM Services index for the month of March rose to 63.7 from 55.3 in February, as the reopening of the U.S. consumer economy is in full swing. While February’s figure was the lowest in three quarters, March’s print was the highest since the ISM began its measurement of the index in 1997.And manufacturing remains on fire, as the ISM Manufacturing survey for March rose to 64.7%, from 60.8% in February, and the highest print for the measure since 1983.

Consumer confidence for the month of March also reflected sharp improvement as the country marches towards a more normal summer. The Conference Board’s measure of consumer sentiment rose to 109.7 versus a 90.4 print for February, marking the largest gain in the measure since 2003. Evidence of this consumer confidence at work can be found in the still hot housing market. Home prices rose by +11.2% year-over-year in January, according to the S&P CoreLogic Case-Shiller Index. The year-over-year gain marks the sharpest increase in almost 14 years, and follows gains of +9.5% in November and +10.4% in December.

And retail sales for the month of March rose +9.8% month-over-month, well ahead of the anticipated +6.1% increase. While it is expected that the pace of spending will fall off slightly in April, a report from the New York Federal Reserve has indicated that only about 25% of the stimulus payments are being spent, and more of the pent up savings, as referenced earlier, could continue to be released over the course of the next several months.

While last year the disconnect between Main Street and Wall Street mystified many, this year could be setting up for an opposite scenario, in which Wall Street could experience a pause or consolidation as Main Street fires up its engines. For now, however, the returns in the first quarter in the capital markets certainly were in line with the positive trends in the economy. Equities and bonds associated with more cyclical, economically sensitive companies performed best, and assets which have historically exhibited positive correlation with inflation fared well.

Conversely, stronger growth and higher inflation expectations resulted in a sharp steepening in the yield curve over the course of the quarter, which compounded the re-allocation away from defensive positioning that investors may have held coming out of the winter Covid-19 surge. More specifically, the S&P 500 posted a strong return for the quarter of +6.4%, which was bested by the return for small cap stocks of +12.7% as represented by the Russell 2000 Index. Outside of the U.S., stronger variants and issues with AstraZeneca’s vaccine, which was expected to be the most widely distributed vaccine in the European Union, has slowed the economic recovery in that region, and international developed stocks turned from outperformers in the fourth quarter of 2020 to underperformers in the first quarter. Bonds, as expected, continue to suffer from the dual headwinds of risk on trading and a steepening yield curve, while commodities and real estate, which typically exhibit positive correlation to inflation were strongly positive for the quarter. 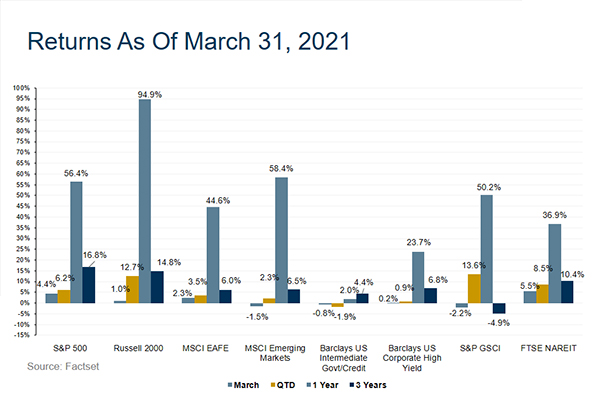 In focus: Goldilocks – so why the bears?

Goldilocks is to 2021 what unprecedented was to 2020. The term is everywhere, but it is important to note that historically, the term “Goldilocks economy” described a scenario in which the economy grows at a measured pace with controlled inflation. With that in mind, the term Goldilocks being used today denotes a slightly different form of balancing act, as U.S. economic growth is expected to be extremely robust, and inflation on a year-over-year basis could be well above target in the near term. This time, it refers to the balancing act necessary to create an environment in which both longer-duration growth stocks with limited fixed assets can perform along with the cyclical companies that typically dominate in a post-recession bounce. This dynamic is perceived as healthier for the markets, as it allows for greater participation in equity gains across the spectrum, versus the concentration in technology and technology proximate names that existed for much of 2019 and into 2020.

The skepticism comes in when it comes to how this type of Goldilocks equity scenario will be delivered. In order for a broad equity market to move higher, a shift away from binary allocation between growth and cyclical names needs to take hold, based on optimism that the new version of the Goldilocks economy will be in place. This new economic vision is supported by the Fed’s commitment to be outcome based, rather than expectations based, in its decision making, and in the delivery of continued fiscal spending despite current budgetary pressures.

In the most basic of terms, it is willingness to believe that the Fed as well as the U.S. government are willing to risk overextending in order to fuel the rapid acceleration of the U.S. economy after a decade of slow growth (even with low interest rates). This is admittedly a tough pill to swallow. Deficit hawks are growing louder in Washington, and the Fed’s new focus on outcomes and delineating between transitory and sustained inflation is new; as such, the threat of policy missteps is worth noting.

Our view is that in the short term, both the Fed and Washington are likely to take the chance of providing too much stimulus to the economy. Inflation and growth have been below trend since the financial crisis, and with many pockets of the U.S. economy still struggling, there is plenty of cover for a continuation of the current plan to spend our way back to prosperity.