After a decade of outperformance culminating with a strong year of returns in 2021, 2022 could represent an inflection point for investors seeking outperformance outside of the U.S.

A new year that deserves a new strategy

"Past performance is not indicative of future results.” Although most often used as a disclaimer in the financial services industry, this phrase represents an important concept in behavioral finance as well. Anchoring to past performance and projecting the past as a predictor never fails to disappoint. With that said, it behooves us to take just a quick glance in the rear-view mirror. 2021 was an extraordinary market for risk taking, as equity returns were buoyed by massive fiscal and monetary stimulus. And optimism quashed the objections of those who believed that the ferocious moves were not justified.

The S&P 500 returned +28.7%, with every single sector posting a double digit return. Even utilities, which thrive in the very worst of times, were up almost +18%, while energy stocks gained +54% on the year. (The sector still has a negative 5 year annualized return, for what it’s worth.) REITs, financials and even technology did well, and while inflation was a constant concern, earnings growth still carried the day. Under the surface, however, there was plenty of pain.

The high valuation stay-at-home/work-from-home darlings of 2020 pulled back significantly, as did smaller cap growth companies which struggled to grab investors’ interest. This trend seems likely to continue, especially given the higher interest rate environment we are facing. Outside of the U.S., the performance wasn’t as strong, as the MSCI EAFE gained only +11.3% and emerging markets equities lost -2.2%.

Bonds were the anchor for the year, weighing on the proverbial 60-40 portfolio return against a backdrop of rising rates. The risk on trade was evident even in the relatively less risky part of the capital structure, as high yield bonds dramatically outperformed high quality bonds. The reach for yield was also evident in the strong return for preferred stocks, which delivered almost +9% for the year.

Taxes continue to weigh on investors' minds and the demand for tax-advantaged income kept municipal bond returns in the green for the year. Finally, the strong commodities performance came as no surprise given the inflationary pressures created by supply chain dislocations; what was perhaps surprising was the negative return for gold on the year, as the precious metal lost -4.3%. 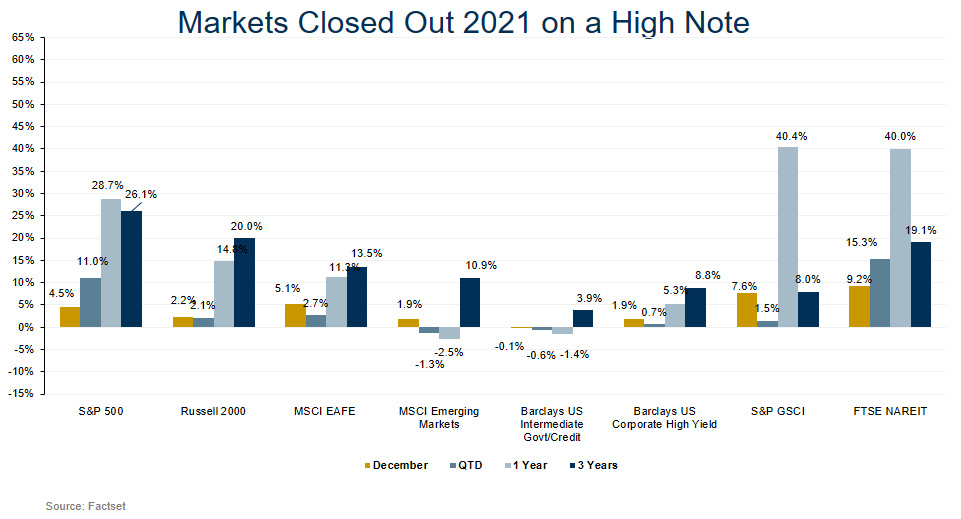 Has the time come for international developed stocks?

There is nothing more fundamental to investing than the concept of mean reversion, and yet, the biggest challenge for investors is attempting to time the point at which assets revert to the mean. International developed stocks have underperformed U.S. stocks for much of the last decade (eight of the last ten years, to be exact) yet U.S. institutional and individual investors have been allocating capital to the MSCI EAFE throughout that period. So why have these markets underperformed? It is worth reviewing the last period in which they did outperform, which was the period between the dot com decimation of the Nasdaq and the implosion of the housing bubble. The best performing stocks globally during that time were correlated with the swelling debt burden which culminated in the failure of Lehman Brothers, or with the voracious appetite for commodities emanating from China.

Considering the makeup of international developed (and emerging markets) indices, it is no surprise that the relatively higher concentrations in these more cyclical sectors would have generated relative outperformance for these indexes. Post-GFC, however, the global economy entered into a new phase, punctuated by low growth and low interest rates. This created the foundation for large cap growth stocks to dominate.

Now, there is renewed emphasis on cyclicals within the U.S. market, with many investors pivoting portfolios to sectors, industries and stocks that typically benefit from higher inflation and tighter monetary policy. One could argue that the biggest challenge with mean reversion is that it requires a catalyst, and timing a catalyst can be difficult. This transition to a higher inflation, higher interest rate posture could represent the inflection point needed to create the opportunity for outperformance for investment universes that have a greater capital market footprint in these cyclical areas. Couple that with the concentration in the S&P 500 growth stocks as well as a small number of growth stocks which could easily be pressured over the next several quarters as casualties of this rotation, and one could foresee a scenario where international developed stocks finally have their day in the sun. 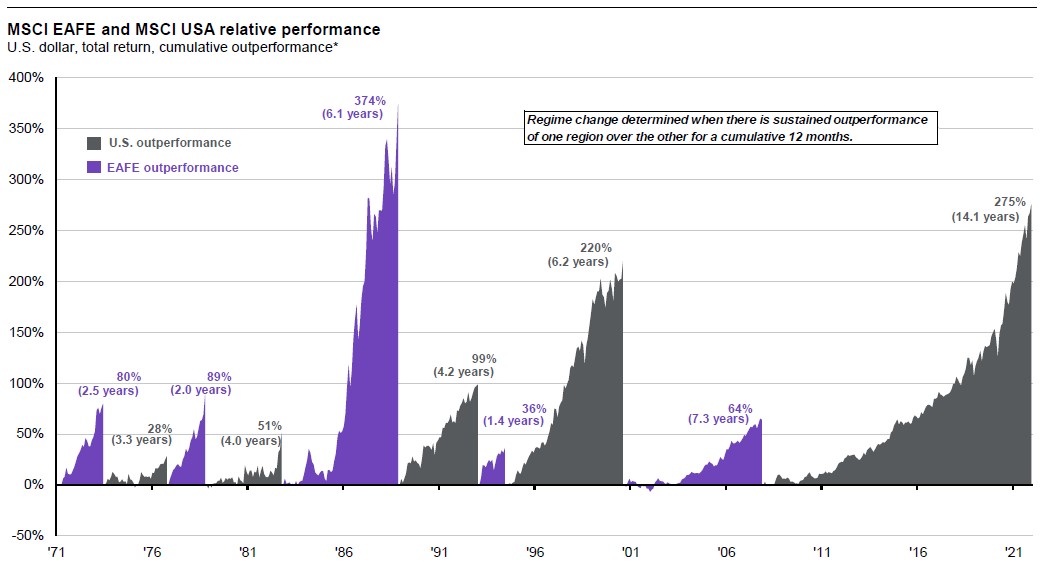 Source: FactSet, MSCI, J.P. Morgan Asset Management. ^Cycles of outperformance include qualitative component to determine turning points in leadership Guide to the Markets - U.S. Data are as of December 31, 2021

Putting aside the argument for mean reversion, one of the most glaring examples of divergence in 2021 was the underperformance of Chinese stocks relative to the rest of the MSCI Emerging Markets index. Coming into last year, the Chinese economy appeared poised to re-accelerate quickly based on significant demand for the country's exports as well as the strong and seemingly effective government response to COVID-19.

Consumer demand was expected to bounce back, similar to the U.S. during the period, and there was even talk of additional fiscal stimulus to deliver a stronger recovery. Instead, the Chinese Communist Party and its leader, Xi Jinping, created anxiety among global investors by cracking down on everything from pop culture to tech companies to for-profit education. Subsequently, the government announced a move towards an ideal of "Common Prosperity", which was a sharp move away from Hu Jintao's more capitalistic approach, and one more in line with traditional socialist principles. This put the spotlight on corporations such as Alibaba and Tencent which have grown into large profitable enterprises, and not as well controlled by the Chinese government as Xi would like. In addition, persistent overinvestment in Chinese real estate remains a problem, and the government in Beijing seems hesitant to shore up developers like Evergrande to the same extent it had in the past.

Yet, China bulls would argue that all of these hurdles represent an opportunity for investors to allocate to Chinese stocks ahead of what could be an excellent year for the global economy, and China in general, which could generate growth in excess of +5%. The issue of course is how to effectively underwrite the risks from a shifting political agenda, while selecting the areas of the economy which can benefit from the rebound and deliver on the promise of excess return. Merely allocating to the largest companies may be a fool’s errand if the burden of "Common Prosperity" results in egregious "taxation", however, investing in smaller enterprises offers even less transparency.

There are also the ethical challenges of investing in companies that operate in a country that has a long track record of human rights abuses, and, unfortunately, China is not unique in that offense. Our view is that a flexible approach to investing in China, and in turn emerging markets, should be the plan for 2022. Closely monitoring the shifting landscape, leveraging the insights of those closest to the companies in the region and being comfortable pivoting should circumstances warrant, is the best course of action. 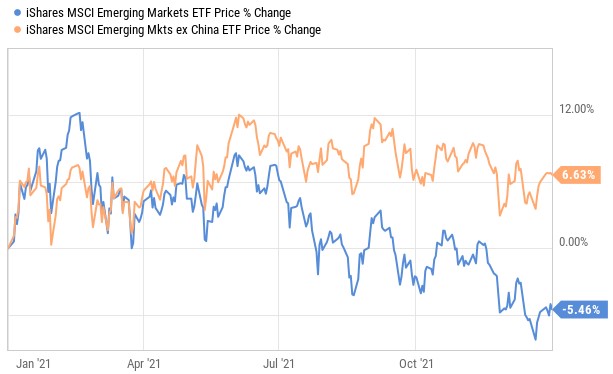 While one could make the case for an inflection point for international developed and emerging markets equities in 2022, our view is that diversification across geographies, asset types and investment styles is the key to generating desired long term outcomes. Our team balances these short term opportunities with our long term expectations and strategic allocations to inform our portfolio construction, and deliver solutions that represent our firm’s best thinking.

We encourage you to reach out to your SVB Private advisor for a deeper discussion on the points above, or a review of your current plan to ensure it remains aligned with your long term needs and goals.