With the election behind us, the Santa Claus rally seemed to come a little earlier than normal, making this year a November to remember scenario instead.

While our focus going into November was clearly on the U.S. elections, the concern around the corner was always a second surge of Covid-19. Without a coordinated federal response and a wide range of local policies related to mask-wearing and social distancing requirements for businesses and schools, it was clear that Covid-19 cases were going to re-accelerate as the weather turned colder. With the uptick in cases has come a renewal of localized lockdowns and deteriorating consumer and manufacturing sentiment, and with it, an even more pressing need for another round of fiscal stimulus. For now, Congress remains at an impasse, unable to move past the differences which have plagued the negotiations since mid-August. Many in Washington pointed to the improvement in economic data experienced over the summer as a rationale to skip a second stimulus package altogether, instead of relying on the Fed to maintain loose financial conditions, and a broader recovery in business activity to occur organically as fears subsided.

With so many factors weighing on the economy, it is important to acknowledge where things sit today. The manufacturing economy, for its part, has shown to be better insulated than the consumer over the last two months. October brought a sharp move higher in the ISM Manufacturing index, which rose to 59.3, led by the strongest reading for new orders since 2004. November’s print exhibited modest moderation, falling to 57.5, based on deceleration in new orders, but still points to a robust positive track for the formerly beleaguered manufacturing sector. While services’ business owners had been buoyed by reopening and consistently improving demand throughout the summer months, the ISM Non-Manufacturing index has trended down the last two months, with the November print falling to 55.9, down from its recent high of 56.9 in August on softer new orders, employment, and deliveries data.

Of course, consumer activity is closely tied to employment, and when looking at the unemployment rate, there has been marked improvement. However, that trend is slowing. November non-farm payrolls were much lower than anticipated, with the U.S. economy adding only +275k jobs versus expectations of +444k. The unemployment rate fell to 6.7%, as the participation rate fell to 61.5%. The number of people not in the labor force who want a job increased to 7.1 million, and that data point remains 2 million higher than its pre-pandemic level. More encouraging were job openings. U.S. job openings for October were better-than-expected, with the number of openings rising to 6.65 million in the month, up from 6.49 million in September. Openings were higher in the manufacturing and health care sectors, with more modest increases in leisure and hospitality, and government roles. However, openings fell in retail and business services, and with 11.1 million unemployed, there are still 1.66 workers competing for each open role; this is likely to keep wage growth subdued at least for the near term and could tick down in the next few months as the economy sputters.

Consumers, for their part, have yet to display the resilience that they did pre-pandemic. Consumer confidence measures have continued to bump along, rising during June and July, following a decline in Covid-19 cases and the disbursement of stimulus payments, and then waning again in August on the expiration of the CARES Act. More recently, consumer sentiment has been pressured again by a pickup in jobless claims and evidence that despite vaccine progress, the pandemic will be an overhang through the middle of next year.

Perhaps the best hope for the economy lies in the confidence of corporations. Much of the overhang on the manufacturing sector in 2018 and 2019 was attributable to the challenges of President Trump's approach to trade policy, and with a new President likely comes a new approach to trade. Interestingly, CEO confidence has risen over the past several months even as President-Elect Joe Biden's chances of winning the election increased, even though he ran on a platform of higher taxes for both individuals and corporations. Perhaps the enthusiasm for a Biden White House rests in the fact that corporate executives understand that it will be difficult for Biden to raise taxes – even if the Democrats do somehow manage to pick up the Senate seats in Georgia, which seems unlikely – during a time when the economic recovery remains tenuous. Creating a disincentive for companies to hire and grow their businesses would not be in the Biden Administration's best interest – at least early in the term.

As for the markets, while October's performance was marked by continued pressure on technology stocks, investors began to pivot to risk on positioning later in the month, with cyclical sectors, along with small cap and emerging markets stocks benefiting at the expense of growth names. This trend continued in November, as the election's uncertainty was lifted, and vaccine optimism grew. Equities across the board outperformed, but the tenor seemed to shift, as domestic small cap and international stocks outperformed the S&P 500 in the month – a marked departure from the trends of the last several years. Commodities, REITs, and emerging markets stocks also performed well, while high quality fixed income posted muted returns, a trend likely to continue for the foreseeable future as monetary policy remains incredibly accommodative globally. 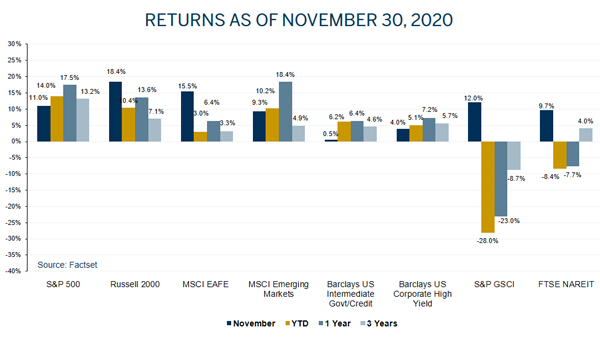 One of the most significant changes stemming from the pandemic was the reset of expectations that growth stocks would lose their luster and that instead, there would be a significant and potentially dislocating rotation from growth stocks to value stocks in 2020 as a manufacturing recovery took hold. Instead, growth stocks, particularly U.S. large cap tech stocks, reasserted their dominance during the difficult months of March, April, and May, prolonging the cycle of outperformance as investors focused on companies that were flush with cash and could continue to grow their revenues in a pandemic stricken world.

Now, with the infusion of monetary and fiscal stimulus globally acting as a tailwind for economic growth, expectations for a surge in cyclical stocks are once again strengthening. The release of a vaccine or several vaccines in the coming months is certainly another central factor to the narrative. And yet, there exists a conflict in the potential outcome of such a rotation. With so much of the S&P 500 index – ostensibly the "stock market" for U.S. investors – concentrated in big technology stocks, any meaningful selling of these stocks, even if the proceeds were reinvested in other sectors of the S&P 500, would create pressure on the index as a whole.

Therefore, for the equity markets to continue to move higher into the first half of 2021, investors need to reallocate capital from other asset classes into equities – not just reallocate within their equity portfolios. The economic backdrop may not support this rotation today, but it likely will as we move into 2021. But not all of those assets will go into the value sectors of the S&P 500, such as financials, energy, materials, and industrials. The infusion could also be allocated across other areas that have been relative underperformers, such as U.S. small cap stocks, international developed stocks, and emerging markets stocks. What is consistent across these asset classes is not just their underperformance, but also that they are all overweight to cyclical sectors, and underweight in technology and other growth names.

So how does that translate to portfolio construction? What it does not imply is that all of an investors' growth exposure should be sold – not by a long shot. Instead, the overemphasis on the growth factor can be minimized by trimming some of that exposure – as represented by the S&P 500 index – and reallocating it elsewhere within the equity universe. This also allows investors to maintain some of this exposure and does not require a binary decision focused on "timing" the market – which is notoriously difficult to do.

The first 100 days of President-Elect Biden's term will be focused on fighting the Covid-19 surge and readying the country for recovery.

While Congress struggles to come to an agreement on a follow-up to the CARES Act, Biden is putting the finishing touches on his pandemic task force and carefully selecting Cabinet nominees who can hopefully help bridge the gap between two parties that remain very far apart. Cooperation will be critical in crafting a plan to kick the economic recovery into high gear while also ensuring that working-class Americans, particularly those left behind in this year's recovery, also have a path forward.