Coronavirus: fear of the unknown

Stocks pause in January, as initial enthusiasm yielded to concerns with slower than expected global growth

Following 2019’s incredibly strong returns, it is not surprising to see modest weakness coming into the year. However, markets actually started strong, only faltering later in the month as China wrestled with the outbreak of the coronavirus.

While the historically strong returns experienced in 2019 could have resulted in outflows due to a reallocation of assets, it appeared that with a Phase One trade deal struck, central banks committed to additional stimulus, and perhaps even a fiscal boost in Europe and China, the backdrop remained supportive for continued gains. However, with much of the optimism tied to a re-acceleration of Chinese growth, the uncertainty around the potential global economic impact of an extended outbreak could upset that dynamic. As a result, stocks were flat to down for the month of January, with the weakness coming in the last two weeks of the month. Not surprisingly, U.S. large cap equities held up best, posting flat returns, while small cap domestic, international, and emerging markets stocks all posted negative returns for the month. While emerging markets stocks were the worst performers for the month out of the major equity asset classes, the returns could have been much weaker in January, save the fact that the Chinese equity market was closed for the last week of the month due to Lunar New Year celebrations.

Bonds, as would be expected, outperformed equities as investors poured into U.S. Treasuries (and the dollar) as insulation against a potential equity market dislocation. Both longer duration and high quality factors outperformed, as the curve flattened and investors shied away from taking unnecessary credit risk. With this most recent move, the yield curve is now once again approaching levels that create concerns around the potential for another inversion of the yield curve – even after three interest rate cuts last year. Perhaps the most interesting response has been the pricing in at this point of an additional interest rate cut – or two – in 2020; this was not on the horizon to start the year.

As for the economy, the data released in late January and early February indicated an uptrend from the rather disappointing data to close out the quarter. January’s non-farm payrolls, for instance, came in at +225k, with +40k in construction added on, likely due to mild winter weather conditions. While the unemployment rate ticked up slightly, wages and the participation rate were both higher as well – both positive signs. In addition, the ISM manufacturing index improved to 50.9, up from 47.2 – a sharper move higher than expected on increases in new orders, production, and employment. For its part, the ISM non-manufacturing index was also better than expected, printing at 55.5; this was particularly encouraging given the softer consumer spending data in the Q4 GDP print. While U.S. GDP posted +2.1% growth in the quarter, in line with consensus, the figure was buoyed by higher government spending and lower imports, with slower consumption.

European data showed some signs of strength in January, with composite flash PMI rising to 47.8 on a surge in exports. Finally, Chinese GDP was flat at +6.0% year-over-year, with industrial production, retail sales, and fixed asset investment for the start of the year all coming in stronger. These numbers are likely to exhibit significant slowing in February, and this data will be critical to estimating the overall impact of the outbreak. 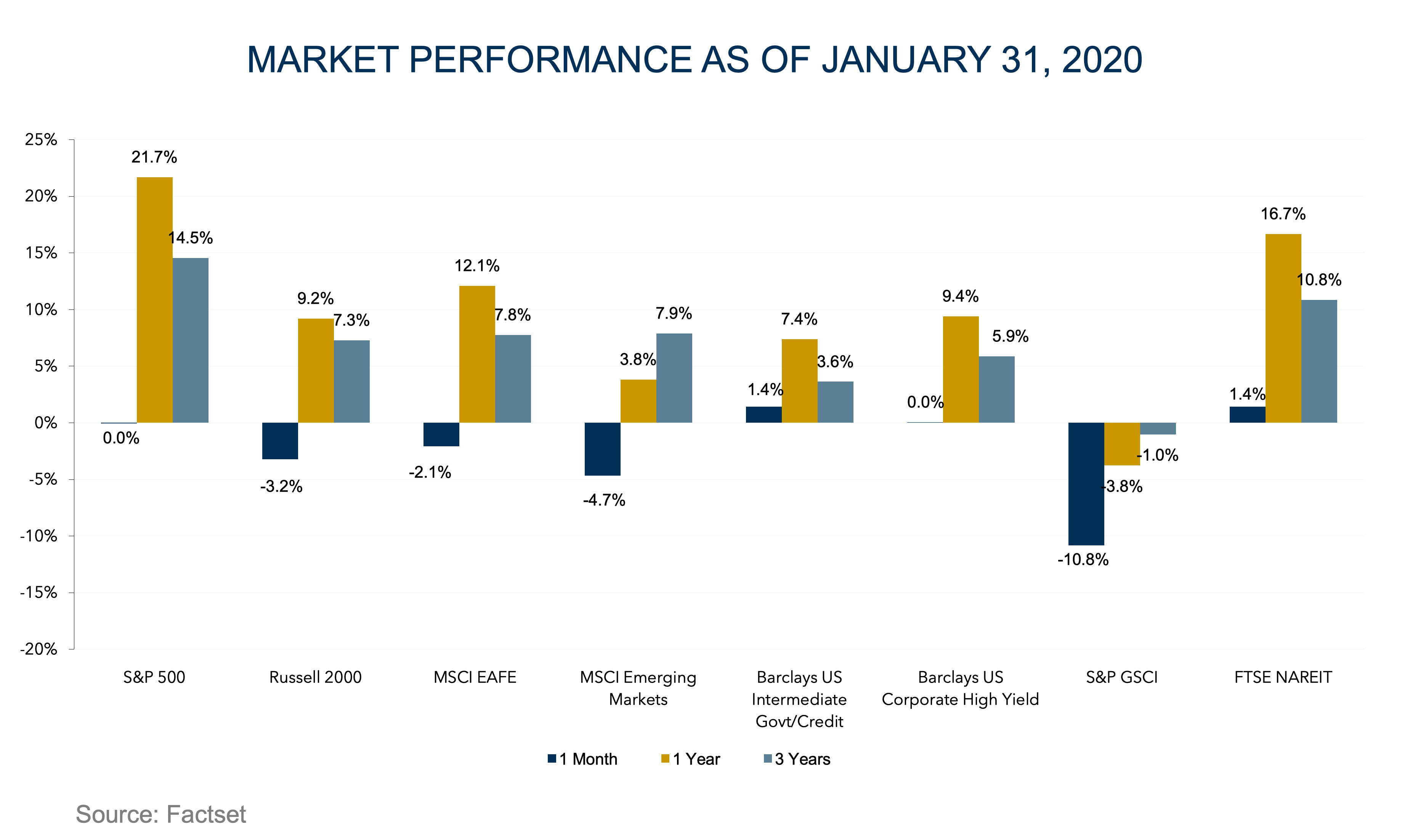 In focus: bulls, bears, and finding an alternative

The challenge faced by the coronavirus – both as a human concern and an economic one – should not be discounted. While it is difficult to determine the course of the virus and how long it will impact the markets, what has been clear over the last several weeks is that investors are not yet willing to fully embrace the risk off trade. And, they are not yet ready to invest as if the global growth we are experiencing is likely to strengthen and persist, either. The stocks which have outperformed over the previous 18 months represent companies growing their earnings and market share, and are not as closely tied to a cyclical rebound in the manufacturing sector. In bonds too, the move has been towards higher quality credits, with demand in high yield lessened due to tight spreads. So perhaps investors have been embracing the risk off trade - a risk off trade in an environment where cash and bond yields remain abnormally low, and equities offer the only real alternative to meet required cash flows.

So what could change this dynamic? If the coronavirus is contained in a reasonable time frame, expectations could once again point towards an inflection higher in the global economy. And there is room for optimism, for sure. Trade tensions have been set aside, financial conditions are loose, and the appetite for fiscal stimulus appears to be growing. Inflation remains under target, and pockets of the economy which have created the foundation for past pullbacks – stocks with zero earnings, high commodity prices, over-leveraged consumers – do not appear to represent a risk currently. While the bulls have all of that to fall back on, the bears have the stark reality that there is very little ammunition, fiscally or monetarily, left in the chamber, and we are still bumping along at GDP that is hardly noteworthy. Either way, the lack of real alternatives may continue to drive stock prices higher – but hopefully growth in earnings and the economy will be the fuel.

What we’re watching: January was a tale of two halves – and February could shape up to be rather similar, setting the tone for the quarter.

Clearly the momentum of the fourth quarter persisted through the first half of January, and investors were ebullient, citing better-than-expected start to the earnings season, a thoughtful Fed, and a light at the end of the trade tunnel. While the impact of the coronavirus was certainly felt, the equity markets seem to be steadying, perhaps becoming a bit complacent as the calendar turned to February. Economic data will now be in focus, with earnings season moved to the back burner, and any indication that the global supply chain will face meaningful disruption is our biggest concern over the next 6-8 weeks.