Examining market response to the conflict in Ukraine

The invasion of Ukraine by Russian forces yesterday cemented for investors that geopolitical risk has moved into the forefront in terms of market dynamics. While the situation had become increasingly tense over the last several weeks, the movement by Russian troops into Ukraine on three fronts indicates that Vladimir Putin is intent on preventing Ukraine from becoming another NATO foothold on his country’s border, and that he is willing to accept the economic consequences of this action in order to maintain Russia’s position in the region. The path towards this conflict began with annexation of the Crimean peninsula in 2014 and continued with Russian support of separatists in the Donbas region during much of the last decade, with Putin recognizing the two separatist “republics” in the last week.

While the threat of military action is cause for great concern from a geopolitical and social perspective, there is little historical evidence to indicate that the current conflict will have a significant negative impact on the equity markets in the long term. Even if the situation in Ukraine continues to escalate, returns during large scale military campaigns involving the U.S. going back to World War I have yielded above average returns during the entire campaign, as shown below. 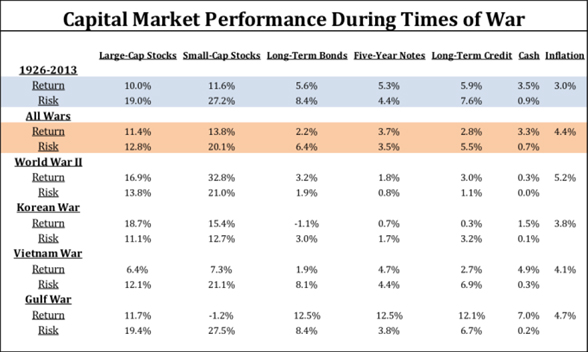 The indices used for each asset class are as follows: the S&P 500 Index for large-Cap stocks; CRSP Deciles 6-10 for small-cap stocks; long-term US government bonds for long-term bonds; five-year US Treasury notes for five-year notes; long-term US corporate bonds for long-term credit; one-month Treasury bills for cash; and the Consumer Price Index for inflation. All index returns are total returns for that index. Returns for a war-time period are calculated as the returns of the index four months before the war and during the entire war itself. Returns for “All Wars” are the annualized geometric return of the index over all “war-time periods.” Risk is the annualized standard deviation of the index over the given period.

When expanding the analysis to include geopolitical events that did not explicitly involve the U.S., the conclusions are similar, as illustrated below. 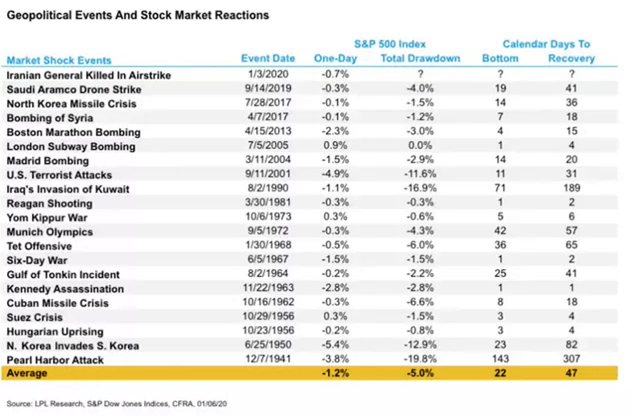 While point-in-time comparisons paint a picture that supports investors adopting a longer term time horizon, it is important to note that each of the events above occurred against its own economic backdrop. One of the biggest challenges when examining the impact of the current conflict relates to the continued increase in energy prices based on fears of potential disruption to supply, which was already constrained, and could be severely impacted by new sanctions.

Despite the steady move higher in prices, OPEC+ remains committed to its current pace of supply in order to gradually get back to 2019 supply levels. While this comes as a welcome surprise for energy sector investors, oil prices now sit above the $100 per barrel mark for both Brent and WTI. And perhaps even more concerning for the European Union and United Kingdom, natural gas as represented by Dutch gas futures is up over +60% on the invasion reports. Russia is also a meaningful global supplier of agricultural commodities and metals, and thus any disruptions could have wide ranging effects on fulfillment and end prices.

That brings the issue back to the risk that has weighed so heavily on the equity AND bond markets since November of 2021 – central bank policy. While some have already claimed that a 50 basis point hike by the Fed in March is not feasible, because of the heightened risk to the markets and the global economy, the sharp increase in energy prices coupled with what could be additional supply chain disruptions in terms of transportation and security, particularly in Europe, could force the Fed and other central banks to continue on the path towards tightening despite the geopolitical overhang.

As we have noted previously, the supply side is the primary reason why inflation is high, and tighter financial conditions have a more direct impact on the demand side – and may not transmit as easily to the supply side – especially with these new sources of disruption. Therefore, while it may feel uncomfortable for central banks to raise interest rates in a time of war, the longer term implications of maintaining loose monetary policy and allowing inflation to continue to pressure purchasing power are undoubtedly more harmful to the global economy in the long term.

With all the issues at hand, the last two months have been the most difficult period for investors since March 2020. One of the biggest challenges is the threat of higher interest rates weighing on assets across the capital structure, and as such, diversification has provided little benefit in terms of absolute return, and only a marginal benefit in relative terms. The S&P 500 is down -12% year-to-date as of this writing, and the Russell 2000, MSCI EAFE, and MSCI Emerging Markets are down -13.4%, -5.8% and -2% respectively in 2022.

Bonds also remain under meaningful pressure as low coupon issues will be less attractive in 12 to 18 months, and high growth, low margin companies have seen their stock prices fall precipitously over the past 8 weeks. The conflict in Europe eased some of the pressure on safe haven assets in the last two weeks but one would have expected a more meaningful move lower in yields in a true risk off trade. With that said, it has become increasingly important for investors to consider the construction of their entire portfolio, evaluating areas of concentration, rebalancing in order to move back to strategic targets and reassessing their tolerance for risk, both emotionally and financially, as markets are likely to remain unsettled for the next several weeks as this conflict continues.