Ahead of Fed Chair Jerome Powell’s speech at the Jackson Hole symposium, there was a listlessness in the markets following a sharp runup from July through early August. Whispers of a potential Fed pivot during that period, following a flat month-over-month CPI print for July, seemed to accelerate the move into risk assets, and as that began to unwind as Jackson Hole drew closer, there were still many investors looking for Powell to adopt a more dovish tone.

Instead, in his 8-minute speech, Powell made it clear that the Fed will continue on its telegraphed tighter path, raising rates through the end of the year and allowing the balance sheet to continue to shrink, further tightening financial conditions. While the Fed has been messaging throughout the summer that tighter monetary policy would be in place until inflation approaches the target rate of 2%, equity and bond markets appeared to shrug off that sentiment prior to this speech, instead appeared to pin their hopes on a fall pivot based on improving inflation figures.

With that said, inflation has only declined modestly while the rest of the economy has shown signs of resilience. At this juncture, there is no economic justification for the Fed to cut interest rates, nor any strong rationale for them to not get to the target range of their dot plot, which is a fed funds rate of 3.25%-3.50% by the end of the year.

Positioning for another scenario, particularly a more dovish move, is in our view ill-advised. We believe the messaging over the last several weeks is consistent with what the Fed has been indicating for months; the expectations for a pivot in September/October were misinformed – and as a result, risk assets sold off in August and the first several days of September as investors better digest that reality.

With that said, we believe the risk that the fed funds rate will be above 3.5% is limited, and if inflation data continues to trend downward, the Fed will pause at the end of 2022 to allow for higher rates to transmit through the economy and a recession remains unlikely during the first half of 2023. 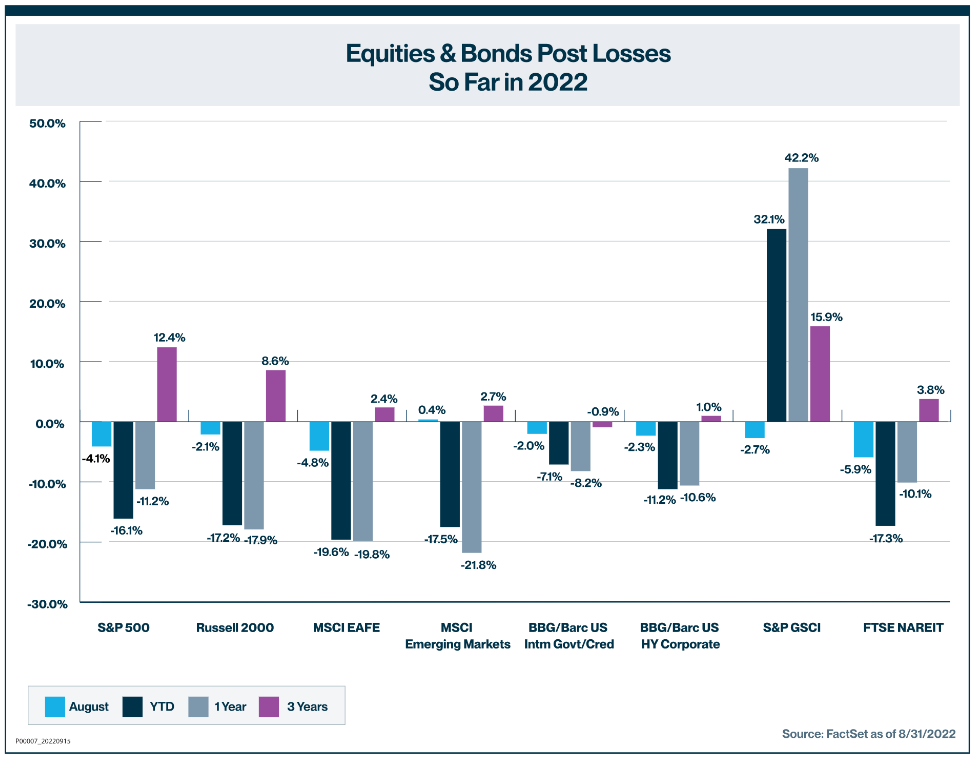 Is another rally brewing for energy equities?

Energy has been the best performing sector so far in 2022, by a wide margin. As of the end of last week, the sector was up +49.2% year-to-date, while utilities, the only other positive sector, was up only +9.2% during the same period.

While the price of WTI crude has been sliding as of late, there are indications that energy equities could have another strong rally to close out the year, given several factors. First, Russia announced that it will stop supplying Europe with natural gas through the Nord Stream 1 pipeline indefinitely in response to Western sanctions against the country based on its invasion of Ukraine.

While this supply is likely to be reallocated elsewhere, and Europeans are likely to bear the brunt of subsequent price increases, the perception of lower supply is likely to result in a bounce for energy commodities. In addition, much of the recent weakness in energy prices across the board can be attributed in part to recession fears, as energy prices tend to fall meaningfully during periods of recession, as outlined in the graph below.

However, our view is that economic data does not point to a recession over the next 6-9 months, and therefore the weakness is likely premature. Finally, there is the possibility of a re-acceleration of activity in China as the National People’s Congress approaches, based on potential changes which would also drive prices higher through the end of the year. 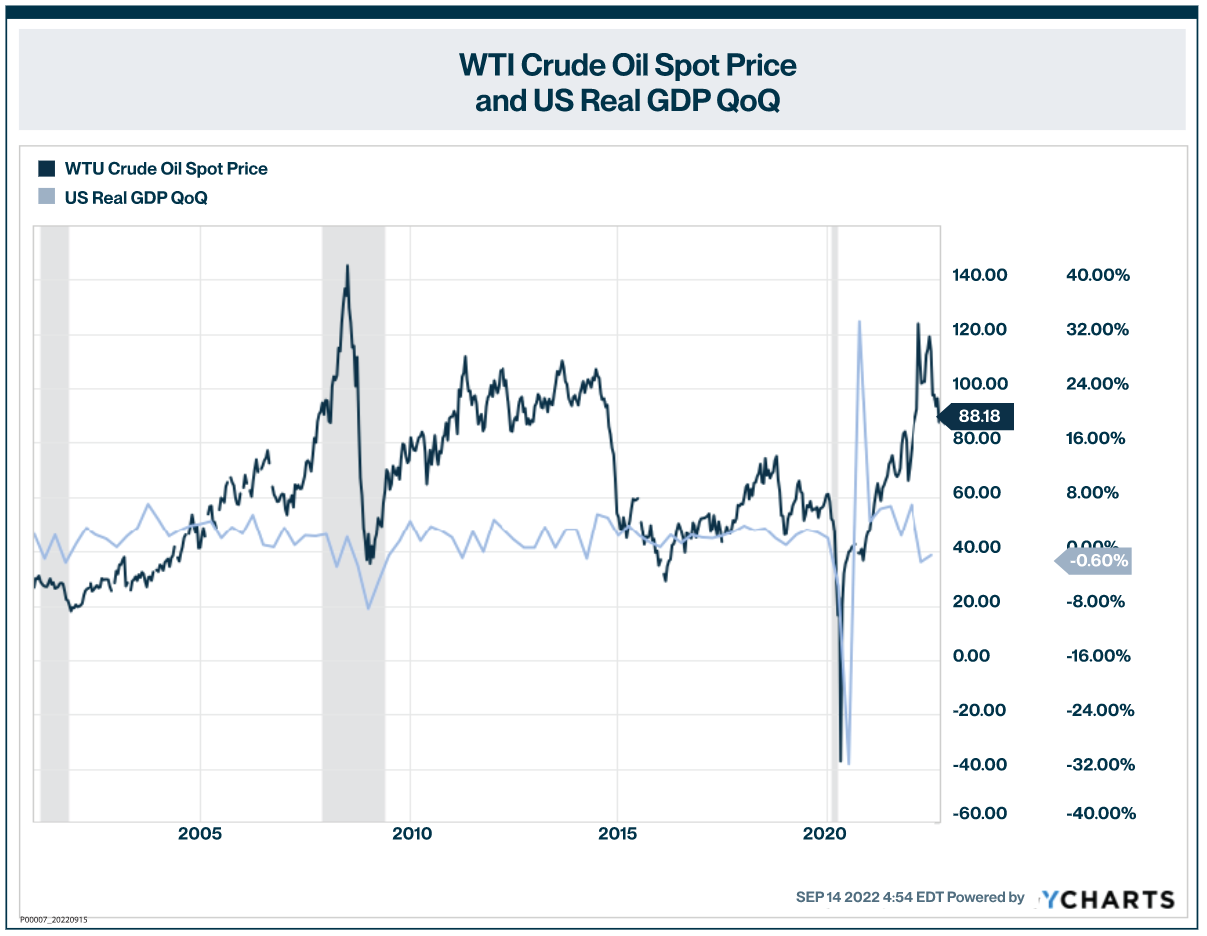 While this resurgence in energy prices would be a positive for equity investors in the sector, it may also threaten the progress experienced thus far in inflation, and create even greater volatility in the broader markets.

Higher prices for gasoline and natural gas in particular have been a meaningful driver of higher CPI prints in 2022, and as such, the persistent decline in gas prices, particularly in the U.S., continues to transmit to lower prices paid for producers as well as consumers.

A reversal of the downward trend in energy prices would likely stall this progress, and as such, we believe that higher energy prices during the winter months could be a drag on risk assets as it would imply that global central banks may be compelled to tighten even more aggressively.

What’s next for the European economy?

The challenge is particularly great for the European Union as well as the United Kingdom, and the situation differs markedly from the United States. The U.S. evolved from a large energy importer, with energy imports peaking in 2005, to a net exporter as of 2019. While this insulates U.S. consumers less than perhaps one would think, given the global dynamics at play in the pricing of energy commodities, the commitment to energy independence at the very least allows the U.S. to avoid political battles over the supply of fuel. This predicament is one that the EU and the UK are facing now.

With the war in Ukraine continuing to rage, there is meaningful pressure on neighboring countries to restrict the consumption of Russian exports, particularly natural gas. The Russian economy is highly concentrated from an output and revenue perspective on the sale of petroleum products, and as such, the economic impact of full sanctions against Russia by NATO countries would have deleterious effects for the Russian economy and for the war effort in particular.

The economic pain would also be significant for the EU and the UK. Consumers are already paying more for natural gas than other regions, and if a complete embargo on Russian oil imports is put in place, rationing for oil would almost certainly result. This would impact consumer spending as well as production, as manufacturing facilities would likely be forced to run at decreased capacity.

The European Central Bank and Bank of England have committed to controlling inflation, but the supply of energy is clearly out of their control. As mentioned above, the Russian government is preemptively limiting gas exports, citing improvements that are needed in the pipeline. However, curtailing exports is a tool previously used by the Russian government to sway policy decisions, and there is certainly an appetite for shorter term pain in order to deliver longer term gains, which in this case would be a reversal of oil import decisions.

What is not yet clear, and is what we are most concerned about, is how deep a contraction in economic activity could be if the current European situation persists. From a currency perspective, exports from Europe are now much more attractive given the strength of the dollar, and that would typically result in increased production and a boost to GDP.

This was the premise for maintaining a modest overweight to our strategic allocation to international equities even as the recovery was expected to be slightly slower in Europe versus the U.S., along with the relatively more attractive valuations available in ex-U.S. equities.

At this juncture, we acknowledge that the likelihood of a recession in Europe has risen, and as such, we are reviewing our expectations to determine if our current positioning is still appropriate given the changing dynamics. 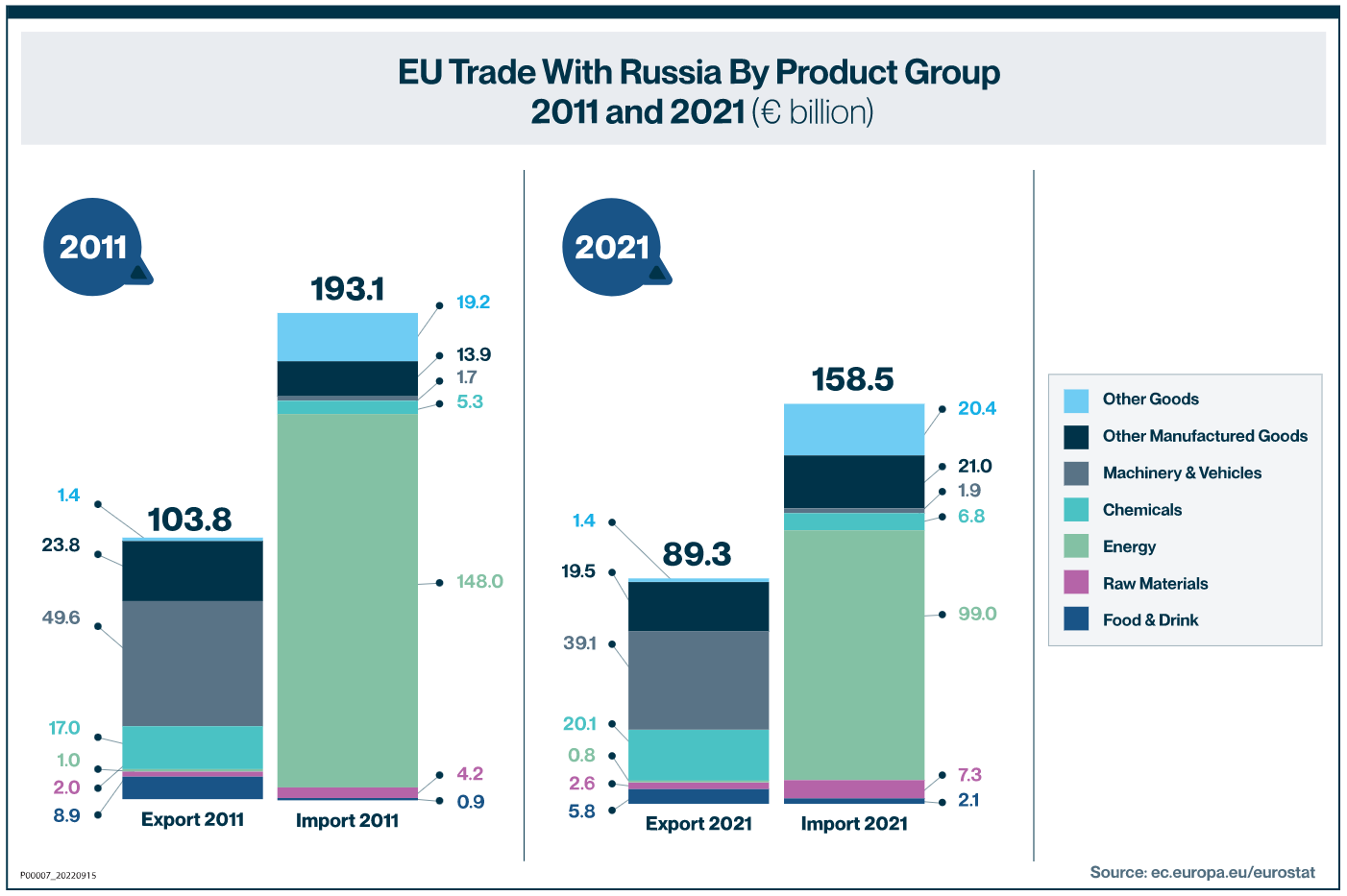 We encourage you to reach out to your SVB Private Wealth Advisor for a deeper discussion on the points above, or a review of your current plan to ensure it remains aligned with your long term needs and goals.