Back to the new normal?

The sharp recovery in equity market sentiment occurred over the last two months was tied to the prospects for the acceleration of economic activity as societal limitations on activity to “flatten the curve” are lifted. Early evidence of economic improvement has justified that enthusiasm – but are there clouds on the horizon?

While the threat of new cases of COVID-19 remains significant, the economic dislocation resulting from shelter-at-home orders and restrictions on non-essential businesses led to calls for a broad reopening of the U.S. economy.

The global response to the pandemic has been nothing short of astonishing. From monetary and fiscal stimulus to coordinated social distancing and shelter-at-home mandates, policymakers have met the challenge of the virus with new thinking and awareness for the real threat a pandemic represents in a global world. However, the caution came at a cost. With consumers driving the majority of economic activity in the developed world, disrupting the avenues of consumption significantly depressed that activity. With case numbers and deaths declining in the hardest hit areas of the U.S., such as California and New York, as well as in other countries, the trade-off is being made between the potential for new cases and the need to loosen restrictions in order to reopen businesses and bring people back to work. The critical question remains how much of this damage, particularly to retailers and restaurants, will be permanent – and how many people will be searching for work 6 to 12 months from now as a result.

While much of this is conjecture at the moment, the economic data released over the past four weeks has shown meaningful improvement. April was clearly a difficult period for the U.S. economy, as data indicated that retail sales fell by -16.4%, which marked the largest drop in history. Breaking the report down, auto sales fell -12.4%, compounding a -25.7% drop in March, while gasoline sales fell by -28.8%. Not surprisingly, non-store retail sales actually increased by +8.4%, but that was the only bright spot. In addition, April industrial production fell by -11.2% month-over-month, with the factory production sub-index faring even worse, declining by -13.7% over the same period – its largest decline since 1919. While inflation might be on the horizon with the amount of liquidity pouring into the system, CPI fell to +1.4% year-over-year, on a monthly decline of -0.8%. This was the first month in over two years that core inflation in the U.S. did not print above +2%. Reflecting this bleak data, the Congressional Budget Office announced that it expects second quarter GDP to drop by -38%, which is consistent with the range of outcomes put forth by economists and sell side research firms.

Recent data has been more optimistic. Both the manufacturing and non-manufacturing components of the U.S. economy improved in May, with the ISM manufacturing survey rising to 43.1 – modest progress from April’s 41.5 print, despite lackluster new orders. The ISM Non-Manufacturing index for May rose to 45.4 from 41.8 the month prior, led by moderate increases in business activity and new orders. Both the University of Michigan and Conference Board’s consumer confidence indexes rose in May as well, as the current conditions component of the index was stronger than future expectations, reflecting the recent stimulus payments. Even new home sales rose in April, up +1% month-over-month - much better than the expected decline of -22%. While sales increased, prices did fall, down -8.5% year-over-year.

Perhaps most important are early indications of improvement in the labor market. Non-farm payrolls rose by the highest amount ever for a single month, with 2.5 million jobs added. This translated into a decline in the unemployment rate to 13.3% from 14.7% last month, and an increase in the participation rate to 60.8%. The better-than-expected results were attributable to hiring at restaurants and by dental offices, and were offset by continued losses in hospitality as well as electronics and automotive retailers. Initial indications are that the PPP loan program may have contributed to the spike in hiring, and that the recovery has been uneven thus far, with minority unemployment still 4-5% higher than for white Americans.

With that as a backdrop, risk assets enjoyed another strong month, both in the equity and credit markets, domestically and internationally. In fact, for the month, the only negative performance came in the long end of the Treasury curve, as the yield curve steepened against expectations of higher inflation and growth in the global economy. U.S. and international developed stocks performed similarly, with small and mid cap stocks outperforming large cap names. Growth continued its reign of dominance over value, but indications of a rotation to value are beginning to take shape as we move into the month of June. Emerging markets stocks have lagged, particularly as the dollar remained strong, and could be under pressure if tensions continue to escalate between China and the U.S. In the credit markets, spreads have tightened in lower quality corporate bonds, while the tenor of the municipal bond market has also continued to improve. Commodity prices are being whipsawed over the last several months due primarily to shifting sentiment around oil, and REITs underperformed on a relative basis due to uneasiness around both the near and long term prospects for commercial real estate. 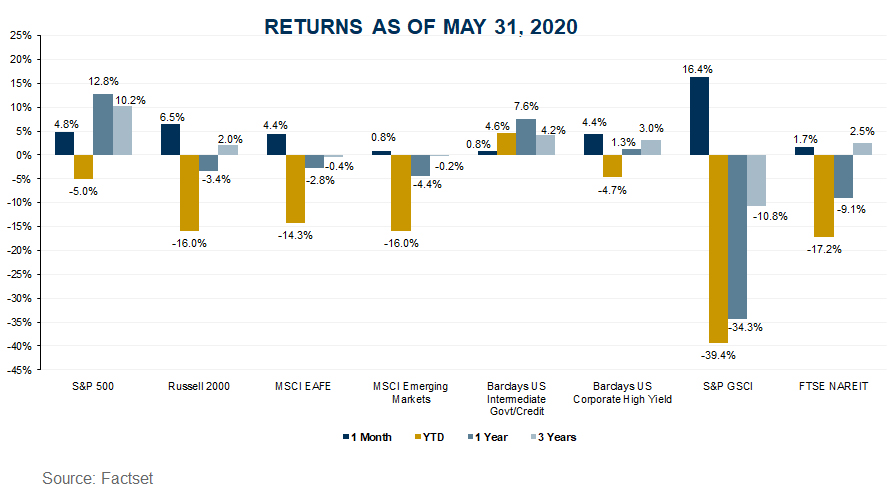 In focus: The China conundrum

The relationship between the U.S. and China has been challenging over the last several years, but coming into 2020, we believed improving relations, stabilization in Hong Kong, and the Phase One trade deal would prove a tailwind. However, after the coronavirus outbreak, U.S. companies were once again forced to assess the impact to their supply chains and sales of a disruption in China. Couple that with growing distrust between China and the U.S. around the initial source of Covid-19, and indications that China may have understated the impact, and the relationship was certainly feeling like it had cooled over the course of March and April, but not to an extent where investors felt like it represented a significant risk.

Fast forward to today, and that risk has increased with the re-escalation of tensions between Hong Kong and China. The issue at hand is new legislation that in Hong Kong which essentially limits the rights of citizens to protest the Chinese government. With these new laws in place, Hong Kong residents will be subject to similar restrictions on speech as mainland Chinese, which is a departure from the way Hong Kong has been ruled since it was transferred from British Rule in 1997 under the “one country, two systems” edict. This threat to autonomy creates an immediate challenge for the Trump administration. Any sanctions against China would likely need to be applied to Hong Kong as well, if the administration is adhering to the terms of engagement in place now with Mainland China.

The Hong Kong situation notwithstanding, the threat of another protracted trade tit for tat could not come at a worse time. Manufacturers which rely on Chinese inputs for production were beginning to see improvement in their supply chains. The potential for increased tariffs to compound significantly lower levels of revenues and earnings could prevent these companies from enjoying the full benefit of the reopening recovery in the global economy, and this could disproportionately impact technology companies.

Both the U.S. and China have a lot to lose right now, with their economies severely hampered by the virus. With stocks seemingly ahead of the economy and earnings already, the China situation could represent the reality check investors don’t necessarily want to see, but perhaps are waiting for nonetheless.

What we’re watching: with the worst likely behind us, determining the path forward becomes the new challenge

Whether one is listening to Fed Chairman Jerome Powell, or economists on Wall Street, or even restaurant owners on Main Street, the view is fairly consistent – the economy is in tough shape, but it will get better from here. However, the pandemic has changed perceptions about a lot of what defines the American experience, and it has laid bare areas of necessary improvement in our communities, our businesses, and our government. The elections in November, as important as they were deemed to be at the beginning of the year, are now even more critical, as the economic recovery will remain fragile, and the ideological divide wide, for the foreseeable future.