Positive Pay allows for dual approval on exception decisions. There are various entitlement options that can be configured to meet client security needs including:

How does it work?

After the option has been configured, the following steps occur during the decisioning process:

After the first approver makes the decisions, an email is sent to all users with approval access.

A user with approval access logs in and approves or denies the exceptions in the Decisions – Pending Approval queue.

The approver can distinguish in the table what decisions were made by the symbol. The dollar symbol is Pay, and the left pointing arrow is Return. 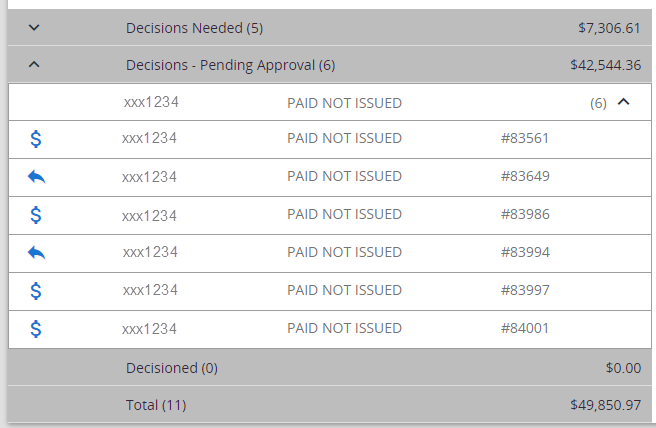 They can review each one individually, viewing check images/ACH transaction details to determine their decision.

If the approver does not agree with the decision, they can deny it. When an item is denied, a note must be added in the Deny Notes section.

The exception then returns to the Decisions Needed section and will require the two approvers to make a decision again. An email is sent to the original approver that includes the denial notes and the name of the secondary approver.

If the decision is approved, an email is sent to the original approver and all users with approval access notifying them of the action taken.

What happens if the exception item does not get approved?

If an exception item does not get approved by the cutoff time, 2 PM EST, the exception will be defaulted to either pay or return based on the client’s implementation paperwork where the default was selected for undecisioned items. In this case, an email is sent to all users with the approval access and the user who initially decisioned the item informing them that the cutoff time has been reached and the default decision has been applied.

Decision by Amount
Resource Library Category (Digital Banking)
Want to have an added level of security for checks that are high dollar amounts? This can be accomplished in Positive Pay by setting up a dollar threshold whereby checks over a certain amount will create an exception and need to be decisioned.
Read more
Reverse positive pay
Resource Library Category (Digital Cash Management Services)
We are happy to announce that on November 1st, 2021 we are enhancing our Positive Pay offering to include Reverse Positive Pay! Read more about it here.
Read more
Uploading positive pay issue files in digital banking
Resource Library Category (Digital Cash Management Services)
If you are a Positive Pay User, you can now upload Check Issued Files directly from Digital Banking without having to launch the Advanced Options screen, saving you valuable time each day.
Read more