In 2018, currency markets were bearish with many currencies (including the RMB) weakening against the USD. The RMB responded to other influences including slow GDP growth, an equity market correction, weakening commodity prices, corporate credit stresses, increased capital outflows and the confounding effect of a lingering trade war with the US. As 2018 ends, the RMB is again approaching 7.00 versus the USD, a level that was previously in play at the end of 2016, following the post-US election broad-based spike in the USD. A psychological inflection point and technical resistance level, 7.00 may be a point at which individuals and algorithms may be compelled to act.

The question is whether the RMB will retreat from or breach 7.00 and depreciate further. For this reason, as China monetary policy becomes more transparent, and the RMB plays a greater role in world currency markets, corporations, investors and institutions operating in China are keeping an eye on the RMB.

Thought by some to be a means to deliberately devalue the RMB to improve competitiveness of Chinese exports, China lifted its “hard peg” of the RMB to the USD in 2005. Since then, China has maintained a “managed” floating exchange rate system to help regulate the RMB and ensure its value is more in line with capital/trade flows and other market forces. As a result, RMB appreciated to a record high of just over 6.0 (per USD) on January 14, 2014, a gain of more than 30 percent. As 2018 winds down, the RMB has given up about half the gains to just below 7.00 (Chart 1). 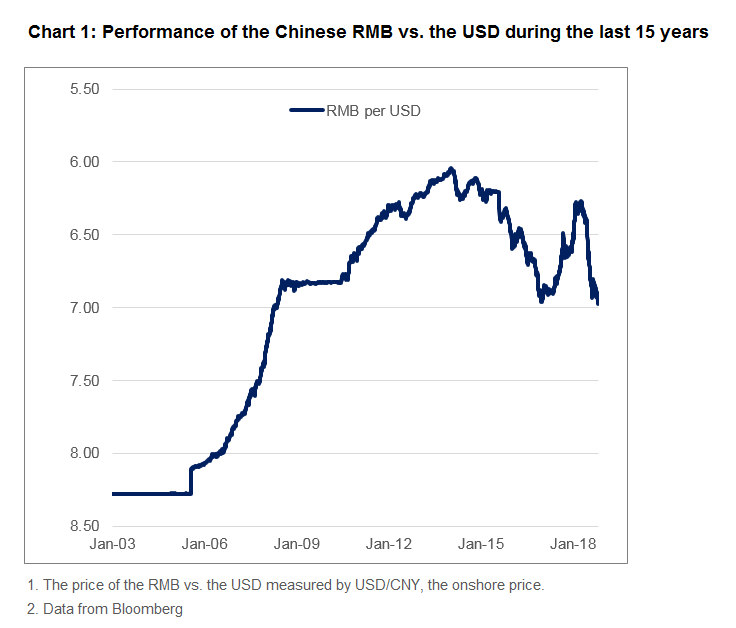 Following the RMB de-pegging in 2005, the RMB appreciated in a consistent orderly manner. This points to the willingness by the People’s Bank of China (PBoC), to respond to capital and trade flow activity in the management of its currency. Then, double-digit GDP growth and a growing trade surplus validated a stronger RMB. The currency rally ended in 2014 as fundamentals changed and flows reversed. RMB depreciation evolved more rapidly than the previous appreciation with greater two-way risk. A question remains whether or not existing controls can be overwhelmed by market forces.

By comparing reserve balances during the last 15 years to the value of the RMB per USD, we can infer that China has taken a more active role in managing its currency. From 2005 to 2013, when capital flows into China were strong, reserves increased proportionately (Chart 2). This suggests that RMB were sold in the open market (and US dollars were bought) as a way to cool excessive currency strength from inflows. All changed in 2014. The trade surplus continued to shrink and outflows intensified. In response, the Chinese central bank used about a trillion in reserves to absorb RMB selling pressure. 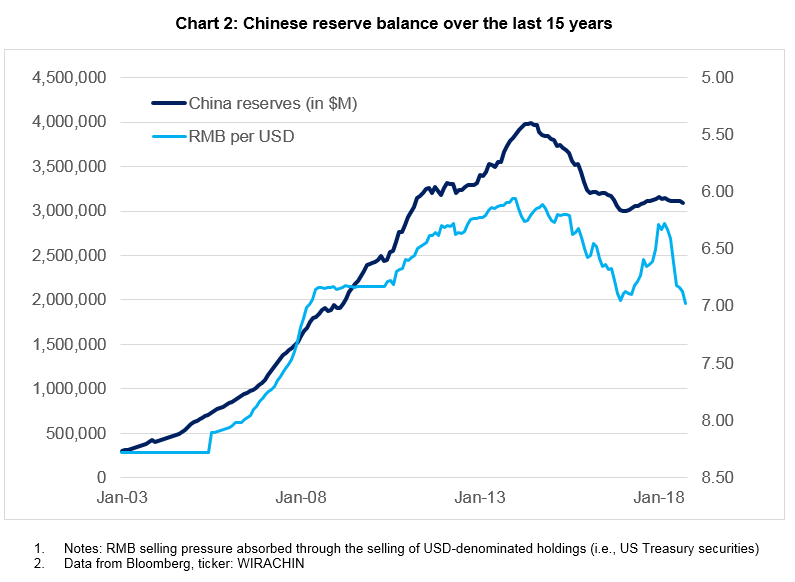 Implication: Even with about 25 percent of its reserve portfolio depleted (i.e., from a high of $4 trillion), if there were a further weakening of the RMB, the size of the Chinese reserve portfolio suggests resources would be available to help modulate the pace of depreciation.

On December 11, 2015, the PBoC launched the Chinese Foreign Exchange Trade System RMB Index (CFETS RMB) to assess RMB performance against a basket of 13 trade-weighted currencies, including G10 and Asian currencies such as the Singapore dollar, Thai baht and the Hong Kong dollar. An additional measure towards evaluating RMB strength/weakness, the index provides investors with a broader perspective of RMB performance, as it removes the focus from its bilateral level versus the USD. Starting from January 2017, data shows that the RMB is stronger versus the USD than it is versus the basket of currencies, by a margin of approximately 3 percent as of December 2018 (Chart 3).

Like the RMB, the Indian rupee has a similar performance history approaching a price inflection point. The Indian rupee (INR) depreciated to a low of 70.00 versus the USD on 8/16/2018 (technical support level for the rupee). After an initial breach, the spot rate oscillated above and below 70.00 for about a week and a half, followed by intensified selling pressure to 73.00 about a month later. Interestingly, the rate of depreciation following the original breach was faster than before the initial breach of the psychological level, indicating that control measures may have been overcome by market forces.


Implication: If similar algorithms are in play for the RMB (as the INR analog above), and 7.00 versus the USD is breached, investors may potentially observe values oscillating around 7.00 for a period following the breach, mounting selling pressure, and accelerating depreciation.

FX forward hedge pricing is determined from the difference in interbank interest rates between two currencies. In recent years US interest rates have risen. During the same period the interest rate differential (IRD) between US and China has narrowed (Chart 4).


Implication: Investors looking to hedge China currency exits could incur lower hedging costs as a result of this dynamic. 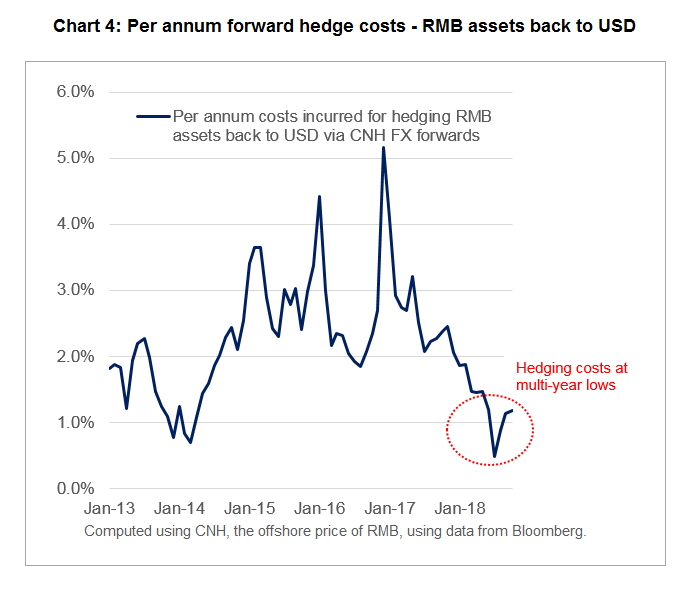 Data suggests that even with myriad pressures pushing and pulling the RMB, PBoC efforts to regulate RMB value over the years have largely been successful. It is likely the PBoC will continue to mitigate RMB volatility and act to control RMB valuation versus other major currencies in response to evolving market forces. Backed by a substantial reserve, closely controlled by the central bank, with a record of performance, the RMB continues to be an important currency for business operations and investor portfolios.

As the currency approaches 7.00 RMB to USD, narrowing interest rate differentials may mean a better price for hedge protection for businesses and investors with RMB exposure.


Contact us
If you’d like to discuss your specific situation to see if vehicles like FX hedge forwards may be right for your company, contact your SVB FX Advisor directly, or Ivan Oscar Asensio, SVB FX Risk Advisory, at iasensio@svb.com.