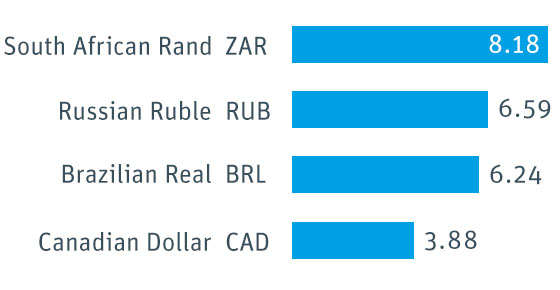 After 10 years of economic expansion, institutions ranging from the IMF, the World Bank, the US Fed to global corporations have expressed concerns of an economic slowdown in the US and abroad. No clear exit has opened for Theresa May and the UK as the March 29 Brexit’s deadline quickly approaches. Trade tensions between US and China have strengthened headwinds to global growth, leading central bankers to take notice and pivot their forward guidance.

Brexit countdown: Time is running out for the March 29 deadline with no clear indication of a deal in sight. PM Theresa May has held steady with her intent to reach a deal and extend the deadline if possible. Opposition party leader Jeremy Corbyn has not ruled out a second referendum altogether. The GBP has rallied with speculation the UK will ultimately “Bremain”, however a messy no-deal and potential collapse looms over the pound.

US/China trade negotiations: US Tariffs on $200 billion worth of Chinese goods will jump from 10 percent to 25 percent on March 1 unless Trump and Xi reach a trade deal which includes larger purchases of US goods and reformed practices on intellectual property from the Chinese. Trump and Xi were scheduled to meet toward the end of February, but the meeting this month in Vietnam is now “unlikely” according to Trump. This puts the 15% tariff increase on crash course to US importers on March 1. The Chinese renminbi furthered its retreat from 7 yuan per USD, reaching 6.7 as the saber rattling tempered down during the stock market sell-off at the end of 2018.

Venezuela on the brink: Amidst the state’s complete collapse, Juan Guaidó, leader of the National Assembly, proclaimed control of the government while President Nicolas Maduro clings to power through military support. The newly issued currency, the Sovereign Bolivar, linked to the oil backed cryptocurrency “the petro”, has seen inflation skyrocket over 1 million percent in months. US sanctions on state owned oil company, PDVSA, and fears of further supply disruptions could drive crude and currencies of resources producing nations higher.

Global growth slowdown: Fears of a slowdown in global growth have spread with central banks setting accommodative tones for their paths ahead.

Federal Reserve: The Federal Open Market Committee (FOMC) signaled patience on raising rates in the minutes from January’s meeting. The committee also caution in trimming its balance sheet, reversing expectations of tighter monetary policy in 2019. This may stifle the dollar strength and cap the greenback’s performance in 2019.

ECB: ECB President Mario Draghi’s acknowledgement of the Eurozone’s growth risks having “moved to the downside” now reduces the likelihood of a previously anticipated summer rate hike. With disappointing German economic numbers, uncertainty of Brexit’s outcome, look for the ECB to remain dovish and accommodative.

Kim Jong Un and Trump round 2: North Korea’s supreme leader and President Trump are planning to kick off a second round of talks near the end of February in Vietnam. Denuclearization of the North Korean regime will be front and center. A hostile result may lead to a short-term rally in safe haven currencies, JPY, EUR, CHF.

Red light, green light: The ugly end of 2018 for global stocks has almost recovered form losses as nearly every major global equity index is now positive for 2019 to date. Emerging market currencies have rallied on the back of investors’ regained appetites for risk assets.

US Government shutdown: After a record 35 days of impasse, Trump passed a bill to temporarily open the government until February 15. The dollar index fell as much as 1.4 percent, while government workers were furloughed and lines grew at TSA checkpoints across the US. 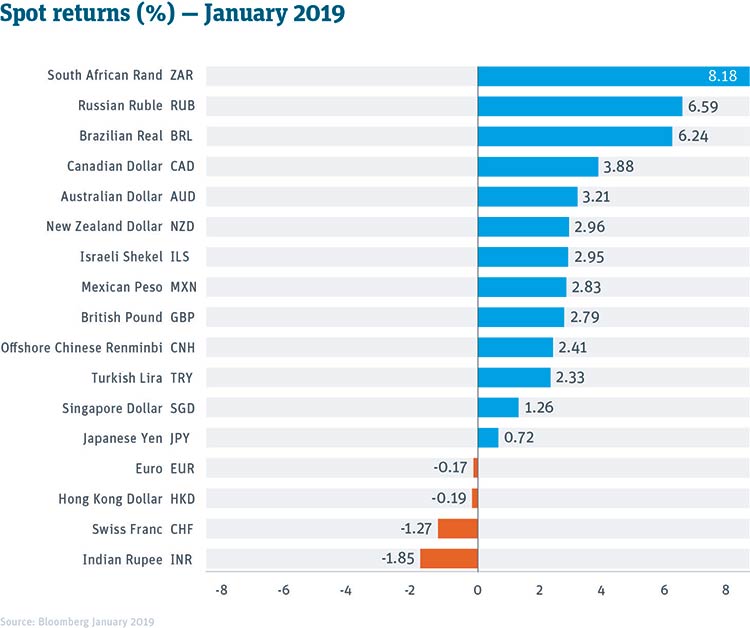 William Joyce is a Foreign Exchange Advisor with Silicon Valley Bank based in San Francisco, CA. Will works with clients to understand the opportunities and risks associated with doing business internationally as they relate to FX markets.

Prior to SVB, Will worked for Bloomberg L.P. in San Francisco where he helped institutional investors and banks use data and analytics to better act on market information. He started his career with Fidelity Investments in Boston, MA and is a graduate of the College of Charleston with a B.S. in Economics.