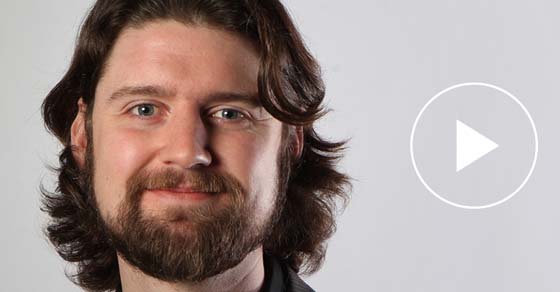 Some entrepreneurs spend years searching for a big problem in need of solving. That’s not the case for Eric Blondeel, co-founder of ExVivo Labs. A niece’s life-threatening allergy prompted him to act. She ended up having to wait more than six months to see an allergy specialist in Canada after difficulty breathing following an allergic reaction.

"We wanted to build a technology that would be more accessible, that could really make an improvement in people’s lives. Medicine doesn’t have to be inconvenient," said Blondeel, who is developing a skin patch to test for allergies. He’s also pursuing his Ph.d in biochemical engineering at Canada’s University of Waterloo.

Passion is essential to a startup, but success also requires resilience — Blondeel calls it "grit" — and a plan to pull through the days that don’t yield immediate results. "Even from day one, our startup felt like Mount Everest. And on one hand that seems crazy, most people don’t climb Mount Everest, but if you break the problem down you find it’s completely doable."

Using a granular approach, solving one problem at a time, bolsters confidence, he advises. "Before you know it, three years have gone by, and your company has grown to 15 people. It’s wonderful, actually."

How to survive the down times

The fortitude to keep going in the long stretches between successes is a common trait he sees in successful entrepreneurs. Of course, a little "creativity to get out of the messes" doesn’t hurt, either.

Blondeel also now recognizes that failure should be embraced as part of the learning process. As a member of SVB Trek’s class of 2017, Blondeel joined two dozen student entrepreneurs, many of whom also had launched a startup. The group dived headlong into the innovation ecosystem through an immersive learning experience featuring salon-style events, hands-on workshops and interviews with world-renowned tech and VC leaders.

During Trek, he discovered "failing is not just OK, it’s a good thing. You grow from it. That was one of the best moments."

Entrepreneurship knows no borders. Blondeel is a child of immigrants and his co-founder was born in Syria. "If you have everybody with the same social background and education, often you all kind of think the same way, and so you might get one solution, which is not bad, but it’s not clever."

On the other hand, he says, "when you put a lot of humanity in a room, we come up with something exciting, and that’s the beautiful thing about diversity and entrepreneurship."

Based on his own experiences and time spent with SVB Trek fellow, Blondeel says he is optimistic: "Phenomenal people are working on important problems. They’re brilliant, they’re hard-working and they’re going to change the world."

Get out of your comfort zone

As for his own journey, Blondeel says he’s preparing for his next role. Sometimes, moving ahead requires founders to take on roles that initially are unfamiliar and leave them uncomfortable. As Blondeel’s company moves into commercialization, he predicts he’ll spend less time on science and more time on salesmanship, at least for a bit. He embraces the opportunity for personal growth: "You get to be different versions of yourself; you grow as a human being and that’s an exciting thing about being an entrepreneur."