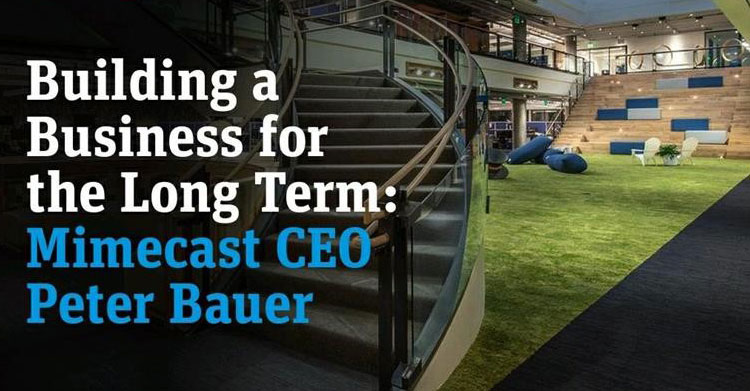 Mimecast CEO Peter Bauer has never been one to take the traditional route. Both his career and entrepreneurial journey have been defined by challenging conventional wisdom. On founding Mimecast in 2003, he did not want to follow the ‘build-up, sell-out’ model. Instead, he and partner Neil Murray were determined to develop a sustainable business for the long term. Seventeen years later, they’re still owners and lead the organisation which now boasts 12 global offices and over 38,600 customers in more than 100 countries. And Bauer is still forging his own path with his own unique outlook. 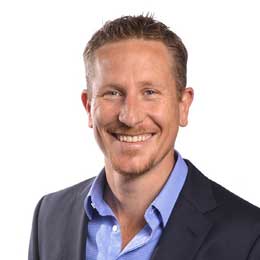 On graduating high school, South African born Bauer was determined to break straight into the business world and realise his entrepreneurial ambitions. “I didn’t want to go to university because I couldn’t spend four years in another predictable setting. If you want to start a business, start a business. Learn from people doing the same,” says Bauer. Instead, Bauer embarked on a one-year business course where he met an experienced mentor with whom he founded a company distributing school supplies. “It was a great way to learn the craft of company building and understand all the different elements of selling. It also taught me a great deal about working with a co-founder, valuable lesson on understanding who you’re in business with, especially when it comes to equity partners and control,” Bauer continues.

A few years later, Bauer decided to move his focus to the technology sector. He teamed up with a computer science graduate friend with whom he founded his second company, helping enterprises set up online business systems. The startup was successful, consulting to many of the largest businesses in the country. In 1998 it was acquired by a larger technology organisation and, after staying on for a few years under new ownership, Bauer moved on to realise his ambition of working in an international marketplace.

However, he reflects positively on what he learned during this period. In fact, Bauer reveals: “I wanted to accumulate experience in the craft of company building. That meant understanding what business models and margins work. Learning how to structure relationships with investors and founders. You feel and experience these things very viscerally and early; it’s fascinating and was very beneficial when founding Mimecast.”

Building a company for the long term

On moving to the UK, Bauer met Mimecast co-founder Neil Murray. They launched the cloud email archiving, continuity and security business in 2003, with a shared vision of building a company on long-term principles rather than looking for a quick sale. However, to realise this ambition, they needed to keep tight control of Mimecast’s destiny.

“We knew that there had to be clear control and leadership; a business cannot be a democracy. There also needs to be a real concern for the stakeholders who sustain the long-term success of the company — the customers, employees and partners. This approach gives you the best opportunity for long term success,” said Bauer.

"You should feel responsible for the trust stakeholders have placed on you, and choose investors that respect that."

An opportunity for investors to make money, not decisions Mimecast’s funding journey was originally focused on angel investors. Bauer and Murray developed their own angel base comprising High Net Worth Individuals and friends looking to invest bonus pots. “We spread out risk and created a base of patrons with non-voting shares. They were on the journey but we steered the ship” says Bauer.

Investing in a winning formula

Bauer was reluctant to take venture capital but came to realise that taking outside funding meant investing in a winning formula. The challenge came in finding VCs that were sensitive to his determination to retain control of the business. “When you start a company and have staff and customers, you should feel a tremendous responsibility to those stakeholders. You need to protect your ability to meet your obligations to them. That means maintaining control of the enterprise and its destiny, because of the trust they have placed in you and choosing investors that respect that,” he explained.

By this point, Mimecast was showing strong growth with a subscription model that was unique at the time. Many VCs approached the business but Bauer and Murray selected Dawn Capital. “They were thinking like entrepreneurs and understood our ethos.” said Bauer.

Mimecast used their initial venture funding to support their launch in North America and the company’s growth trajectory further increased, despite the financial crisis of 2008 and 2009. “We could save businesses money and we were doing important work around cybersecurity and helping people move to the cloud so we carried on growing. With hindsight, when I look back at that growth, it was really exciting. I can see why the VCs were drawn to it,” shares Bauer.

In terms of lessons for new founders, Bauer thinks that VCs are now more open to founders continuing to lead and control a business. “We had these conversations in the 2000’s when VCs were wired to think that a founder can’t run the company after a certain point. However, it’s easier now; many have now figured out there is a magic in picking great founders that can drive long term growth,” said Bauer.

Finding a bank that can identify opportunity value

VC funding aside, Bauer and his CFO were exploring options for additional runway and looked at venture debt with Silicon Valley Bank. “In the early days, we learned a hard lesson about the lack of flexibility at major banks. However, partners like Silicon Valley Bank understand what building a technology business is about. They understand the value of IP and see the potential of emerging companies as well as the benefit of what some cashflow runway can bring. Silicon Valley Bank has done a great job of working with startups and their investors to realise potential,” he says.

What is next for Mimecast?

Under the leadership of Bauer and his executive team, Mimecast has seen huge success and the team have more exciting plans ahead. Since going public on NASDAQ in 2015, the company has grown tremendously, employing almost 2000 staff globally and they recently announced their 8th acquisition. They have recently expanded their operations in central Europe, launched in Canada and announced plans to target the massive US public sector market. They continue to expand their UK operations, with core R&D being based in London, and a vibrant market facing presence, London is still the company’s largest office globally.

Click here to view the PDF version of the article.

Surviving an Economic Disaster Means Being Flexible, Except About the Inevitability of Your Vision

Tom Gonser, who stepped down as DocuSign’s Chief Strategy Officer in 2016, weighs in on how companies can survive economic disasters.
Read more

Views, opinions and statements expressed by third party are not the views of SVB Financial Group and its subsidiaries (“SVB”) and the appearance on any SVB website does not constitute endorsement by SVB. Any opinions expressed are merely opinions and not facts. All information is for general informational purposes and not to be construed as professional advice or to create a professional relationship and information is not intended as a substitute for professional advice. © 2020 SVB Financial Group. All rights reserved. SVB, SVB FINANCIAL GROUP, SILICON VALLEY BANK, MAKE NEXT HAPPEN NOW and the chevron device are trademarks of SVB Financial Group, used under license. Silicon Valley Bank is registered in England and Wales at Alphabeta, 14-18 Finsbury Square, London EC2A 1BR, UK under No. FC029579. Silicon Valley Bank is authorised and regulated by the California Department of Business Oversight and the United States Federal Reserve Bank; authorised by the Prudential Regulation Authority with number 577295; and subject to regulation by the Financial Conduct Authority and limited regulation by the Prudential Regulation Authority. Details about the extent of our regulation by the Prudential Regulation Authority are available from us on request. Silicon Valley Bank is a subsidiary of SVB Financial Group, a Delaware corporation. SVB Financial Group and its subsidiary Silicon Valley Bank are members of the Federal Reserve System and Silicon Valley Bank is a member of the FDIC.
Get monthly startup insights and advice
Thanks for signing up!
Thank you for signing up for insights from Silicon Valley Bank.  Each month we’ll share insider knowledge and lessons from breakthrough founders, advisors, and VCs that can help you navigate fundraising and operate more efficiently.
Go to Trends & Insights Now

My First 90 Days: A CFO’s Playbook For Steering A High-Growth Startup Toward Long-Term Success