British pound outperforms G-10 peers. In 2021, GBP outperformed most of its G-10 peers amid a broadly strong US dollar environment. Notably, the pound rose to an 18-month high against the euro yesterday.1

High vaccination rates and a hawkish central bank fueled demand for GBP in H1. However, a big increase in UK business closures and a surge in Covid-19 fatalities may stop the BOE from tapering its bond-buying program anytime soon. 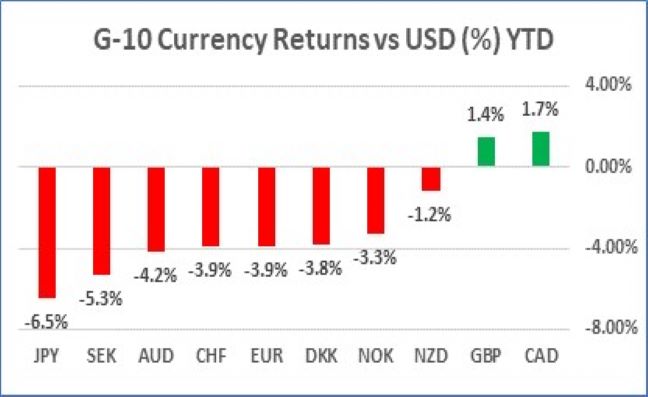 Strong dollar environment. In 2020, the dollar weakened broadly against its G-10 peers (GBP rose only 3.1%, in 8th place). Early this year, the dollar’s downtrend unexpectedly stopped, reversed, and headed higher. Since late May, the dollar index has risen 4%, while the pound dropped only 2%, outperforming most other G-10 currencies.3 Traders are focused on potential Fed signals on tapering at the Jackson Hole Economic Policy Symposium on August 26-28.

Surprising rise of Covid-19 deaths. In H1, the UK led most developed countries in vaccination rates. However, recent figures show that Covid-related deaths in England and Wales hit their highest weekly total since late March.4 This most likely reflects the impact of the Delta variant/third wave, which began in June.

Bank of England’s (BOE) increasingly hawkish posture. Last week, the BOE kept rates steady and its $1.25 trillion bond-buying program intact. However, some policymakers broke ranks by suggesting tighter monetary policy sooner rather than later.8 The BOE is expected to be among the first central banks to begin the process of unwinding its extraordinary stimulus policies, in stark contrast to the ECB.