Countries around the world suffered through a rapid rise in cases and deaths related to COVID-19. Governments forced their populations to hunker down, which disrupted commerce and put people out of work. World growth came to standstill. Prices of financial assets crashed as investors ran for cover.

Governments, hoping to stem the tide of a recession (or worse), let loose with fiscal stimulus programs and central banks opened monetary spigots like never before. The rush to produce and get medical supplies to those in need and to find a vaccine for the virus drew huge sums of money from both public (Tesla and Dyson1) and private sources. Businesses hurried to minimize cash burn and arrange contingency financing. It was all unprecedented – let’s hope it works.

COVID-19 was a genuine “black swan” event – an unpredictable event characterized by extreme rarity, severe impact, and the widespread insistence they were obvious in hindsight (Investopedia).

Panicky investors were whipsawed by the markets. Financial markets during the month were characterized by wild day-to-day swings that oftentimes seemed to defy logic. On several occasions, fund managers sold anything and everything – the winners as well as the losers. Selling the winners provided the cash to meet margin calls on the losers and redemption demands. At month-end, however, the standard safe-haven assets were most attractive: 1) currencies – the US dollar, Japanese yen and Swiss franc; 2) equities – the Utility sector; 3) fixed income – US Treasuries and German bunds; and 4) commodities – gold.

Central banks had to step up…again. Most of the big central banks either cut rates, supplied huge amounts of liquidity, or both. The Federal Reserve cut rates to zero, gave new funding lifelines to banks, and began a new program to buy commercial paper.2 The European Central Bank started a €750 billion bond-buying program of both government and corporate debt.3 The Bank of England implemented an emergency interest rate cut and provided cheap funding to banks.4 Co-ordinated action by central banks in the future is increasingly likely.

Governments stepped up…finally. Governments, which at first had been reluctant to increase fiscal spending, were pressured by the reality of the moment, and finally let loose. Congress passed a $2 trillion rescue plan for companies and families worth about 9% of U.S. GDP. The U.K. launched a £330 billion ($380 billion) loan package for companies. Germany, usually very tight on fiscal spending, went all-in with a €750 billion package, including liquidity guarantees, direct equity stakes in companies, unlimited loans to distressed companies, and grants to firms hurt by COVID-19. 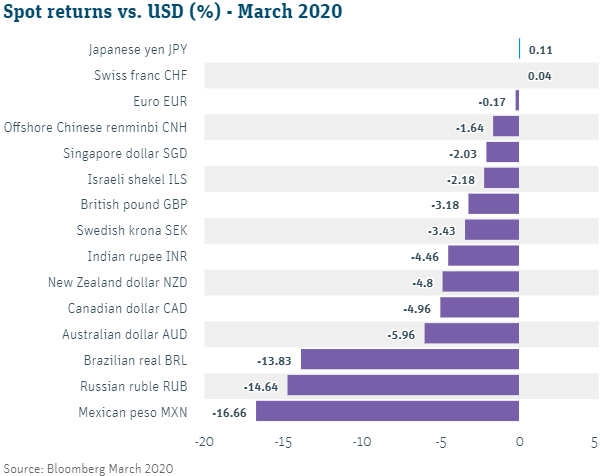 Which emerging market (EM) countries will be hit the hardest and which may outperform? A triple whammy is pummeling emerging market countries and their currencies. These countries are at the mercy of: 1) declining global economic growth and trade, 2) capital outflows, as investors unload ‘risky’ emerging market assets, which spills over into 3) commodity prices, affecting prices of key EM resources from copper to palm oil. Commodity-rich countries Mexico and South Africa saw their currencies weaken by nearly 30% during the month.5

Most importantly, however, it will be weaker growth in China that will be most hurtful to EM, since China is the world’s largest consumer of raw materials. The countries most likely to outperform are those with both current-account surpluses and undervalued currencies, including Russia, Taiwan, Malaysia, Mexico, and Turkey.

Will China be the first country to recover from COVID-19? In China, factories are running, flights are resuming, and stores reopening. China declared its epidemic contained after new cases allegedly fell to zero on March 19.6 But as of today (April 3), China is the first to return to lockdown, shutting down Jia county and its approximately 640,000 residents. China’s National Health Commission reported over 1,300 asymptomatic cases currently under nationwide quarantine.7 Will countries around the world follow China’s model, given this new set of events, and after China ousted reporters from three major U.S. newspapers?

US firms rethinking China-linked supply chains. Last year it was the US-China trade war, this year its disruptions related to COVID-19 that illuminate deep vulnerabilities in China-linked supply chains for both US- and European-based companies. In the long run, domestic rather than overseas production will inevitably be re-examined, as well as just-in-time manufacturing.8

COVID-19 calls the shots. “… while the thrust of government policies is directed to ameliorating the economic and financial damage from the pandemic, the virus makes the timeline,” said Dr. Anthony Fauci, Director of the National Institute of Allergy and Infectious Diseases.

A US recession is on its way. JPMorgan last week lowered its tracking estimate of US economic growth for Q1 and Q2 2020, as more states went under lockdown. The investment bank now expects real U.S. GDP to be -10% in Q1 and -25% in Q2.9 This meets the technical definition of a recession: two consecutive quarters of declining GDP [Reuters, March 28]. For those interested, an economic depression is an extreme recession that lasts three or more years or leads to a decline in real GDP of at least 10%. [Investopedia]

Bad news spans the globe and no economy is spared. Yesterday, Ireland’s central bank predicted the country faces 25% unemployment.10 And nearly every country confronting the pandemic sees a recession in its future.

As Neil Irwin said in the New York Times, “There are rare moments when the world economy seems to be reconfiguring itself beneath our feet. March 2020 is one of those moments.”11

9 Bloomberg, “Wall Street Agrees the World is in Recession, Disagrees on Depth,” March 19, 2020